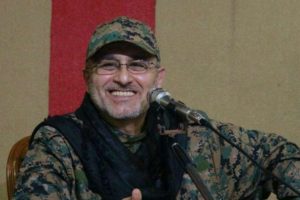 Mustafa Badreddine was a bad actor.

He’s now dead. Who killed this terrorist? Hezbollah, the terror organization he helped lead, thinks the Israelis are responsible for the bomb blast that killed Badreddine in Syria.

If the Israelis indeed are responsible for the death of Hezbollah’s top military leader, my initial reaction is this: Good deal … now let’s go after the rest of them!

I am one who strongly backs Israel’s effort to defend itself against the terror threat the nation’s existence every day.

I’ve had the honor and the pleasure to travel throughout the country. It was seven years ago this week, in fact, that I ventured to Israel for a month with four dear friends as part of a Rotary International Group Study Exchange.

One of the places we visited was in Nahariyah, on the country’s northern border with Lebanon. We could see the fortified border — complete with barbed wire and watch towers — along the ridgeline where we toured. Just on the other side of that border is a nation where Hezbollah runs wild.

Just as Hamas has launched rockets into Israel from Gaza, Hezbollah has done the same from Lebanon and Syria. They send their missiles into neighborhoods, targeting civilians. The Israelis are forced into a constant state of alert against these terrorist organizations.

Do the Israelis make any apologies for the measures they take to eradicate terrorist leaders? Absolutely not … nor should they.

As Reuters reports: “Israel deems Hezbollah its most potent enemy and worries that it is becoming entrenched on its Syrian front and acquiring more advanced weaponry.”

It wouldn’t surprise any observer of this ongoing conflict to learn that Israeli agents detonated the bomb that killed Badreddine.

Will the Israelis own up to it? Probably not.

That’s all right with me.