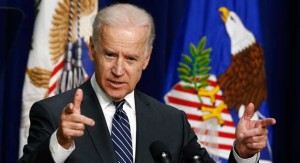 Then the guy hires a communications chief who once worked for former Sen. John Edwards’s — yes, that John Edwards — ill-fated 2008 presidential campaign.

Kate Bedingfield is her name. I won’t hold her former job as flack for one of recent political history’s more notorious marital infidels against her.

She reportedly is a first-rate PR expert. That ratchets up the chatter about the vice president’s political ambitions.

Biden met this past weekend with Sen. Elizabeth Warren, the Massachusetts Democrat who’s the darling of the far left of her party. She, too, has been considered a possible presidential candidate, even though she has virtually eliminated any possibility of her running. I did say “virtually,” yes?

What was that meeting all about? Was he seeking her endorsement? Is he looking for further assurance that she’s really, really and truly not a candidate in 2016? Might he be sounding her out about joining him on a prospective Democratic ticket?

Only they know. They ain’t tellin’.

I made need a tranquilizer before this is all over.

Today — as opposed to just the other day — that fake trick knee of mine is telling me the vice president wants to make one more run at the Big Job.

He’s just got that one obstacle standing in front of him: Hillary Rodham Clinton. But now it appears she’s been damaged … maybe, possibly. That e-mail mess is getting harder to clean up.

Is the vice president now poised to rescue the Democratic Party and from its far left fringe, which now seems enamored of Sen. Bernie Sanders?

We need a decision. Soon.

And my hunch is that is exactly what Kate Bedingfield is telling him.