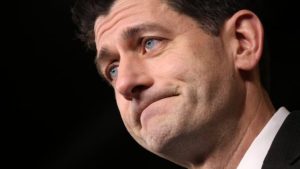 Politicians can and do have second thoughts, yes?

Consider what happened with U.S. House Speaker Paul Ryan’s decision to ask for the resignation of House chaplain the Rev. Patrick Conroy.

He pulled it back. Father Conroy will stay on the job, offering prayers for legislators as they grapple with the issues of the day.

Ryan had incurred considerable national anger when he asked Conroy — a fellow Catholic, as is Ryan — to resign. Ryan hasn’t yet explained his reason for seeking the chaplain’s resignation. Reports have swirled that Father Conroy had offered a prayer that some had taken as criticism of the Republican caucus’s passage of a tax-cut bill that Donald Trump signed into law.

Ryan asked Father Conroy to submit a letter asking the speaker to rescind his request to resign. Conroy did and Ryan accepted it.

As The Hill reported: “I have accepted Father Conroy’s letter and decided that he will remain in his position as Chaplain of the House,” Ryan said. “My original decision was made in what I believed to be the best interest of this institution. To be clear, that decision was based on my duty to ensure that the House has the kind of pastoral services that it deserves.

“It is my job as speaker to do what is best for this body,” Ryan added, “and I know that this body is not well served by a protracted fight over such an important post.”

The speaker is correct that the House need not be battered by a “protracted fight” over the chaplain.

Except that Ryan started the fight by issuing the resignation request in the first place.

I am one American who is demanding an explanation from Ryan why he picked the fight with the priest. Please tell us, Mr. Speaker, that your initial request had nothing to do with partisan politics. 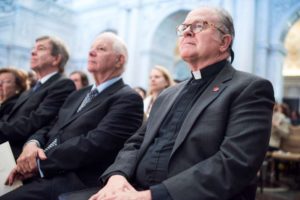 It’s not every day that the chaplain of the U.S. House of Representatives finds his or her name in the news.

The Rev. Patrick Conroy has just entered a new realm of celebrity status. House Speaker Paul Ryan asked Fr. Conroy to resign — but he hasn’t told the chaplain why he wants him out.

What’s going on here? Why push the House’s spiritual leader out of the way?

Fr. Conroy, a Jesuit priest, has served as chaplain since 2011; then-Speaker John Boehner, selected him.

Boehner left office. Ryan — another Catholic — succeeded him as the Man of the House. Now, Ryan wants Fr. Conroy to hit the road.

The New York Times reports: Father Conroy’s resignation is all the more contentious in Catholic circles because Mr. Ryan is a Catholic conservative, whereas Father Conroy is a Jesuit, a branch that is viewed by some as more liberal.

To his huge credit, Fr. Conroy has declined to engage in that discussion.

I certainly understand that we are functioning in highly contentious times these days. To ask the chaplain of the House, the fellow who opens congressional sessions with an invocation seems to take contentiousness to a new level.

Speaker Ryan not only owes the chaplain an explanation, but he ought to give offer one as well to the rest of us. He doesn’t need reminding, but I’ll do so anyway: The speaker works for us.

Those of us who pay for the People’s House deserve an explanation, too. Come clean, Mr. Speaker.