Given that I didn’t watch the Oscars ceremony Sunday night and that I didn’t really care two hoots about any of the films or actors being honored, I was surprised to learn this morning after rolling off the rack about the “real story” of the night’s event in La La Land.

Will Smith smacked Chris Rock in the face over a stupid joke that Rock made about Smith’s wife, Jada Pinkett Smith.

That became the top story on the TV news shows today. To which I said … huh?

My take is this. Will Smith should not have pranced onto the stage and smacked Rock, a guy I do not consider to be much of a sympathetic character. He could have kept his emotions in check and perhaps had a “frank” and “manly” discussion with Rock after the show.

But … he chose instead to make a spectacle of himself, to get his name plastered on headlines around the world.

Oh, and then to supplant another story that really is worth telling, which was the Best Actor honor that Will Smith won for his role as Venus and Serena Williams’s father in “King Richard.”

Enough on that. I need now to concentrate on issues that really matter … like the bloodshed in Ukraine. 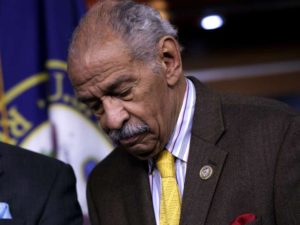 John Conyers has given us a new definition of how a politician leaves public life.

The Michigan Democratic congressman today has announced his retirement effective today. By my standard, he has decided to “retire in disgrace.” He didn’t just resign. He didn’t wait until the end of his term to walk away.

Conyers, facing sexual harassment allegations — and a settlement he paid to one of his accusers — has called it a career.

It’s a fascinating and correct end to a lengthy career in politics.

Conyers is the longest-serving member of the U.S. House. He’s been on the job for 53 years. He has held positions of extreme power and influence and, according to several women, allegedly abused his power and influence in disgusting and disgraceful ways.

Here’s a serious non-shocker: Conyers is citing factors unrelated to the allegations as his reason for retiring. According to The Associated Press: “Conyers’ attorney, Arnold Reed, has said Conyers’ health would be the paramount consideration in whether he decides to step down from his House seat. He has already stepped aside from his position as ranking member of the House Foreign Affairs Committee.”

This is what politicians do. Faced with mounting pressure stemming from misbehavior, they cite other “reasons” for deciding to give up the fight. Those “reasons” might have merit or … they might be made up to divert attention from the reality of the moment.

I don’t know about Rep. Conyers’ health, although he is past 80 years of age. So, I suppose his health might be an issue.

Whatever the case, the man needs to go. He’s served long enough and from this moment forward every single day he remains in office will be clouded by the hideous allegations that have become all the talk in Washington, and Hollywood … and even on Main Street.