Texas Lt. Gov. Dan Patrick, no shrinking violet to be sure, has decided the latest “enemy” of the public are the educators who lecture our students attending public universities.

Patrick wants to restructure the tenure status granted to professors, making tenure subject to annual review rather than every six years. He wants public college and universities to stop teaching “nutty” notions. He said, according to the Texas Tribune: “I will not stand by and let looney Marxist UT professors poison the minds of young students with Critical Race Theory,” Patrick wrote on Twitter. “We banned it in publicly funded K-12 and we will ban it in publicly funded higher ed … “

Let’s hold on a minute, shall we?

I have been critical of universities that ban conservatives from speaking at, say, convocations or commencement ceremonies. Our institutions of higher learning are supposed to be open to all ideas, to all principles, all perspectives, all world views. Why not, then, let students decide which of them they embrace? Why not expose these young people — and, frankly, some students who aren’t so young — to all ideas?

Patrick favors only those ideas that comport with his own rigid conservative view of the world.

He targets “critical race theory” because, according to Patrick, it promotes a hatred of the country. Why? Because professors would dare to tell students about the nation’s original sin, the enslavement of African Americans. Uh, Dan? It happened, man! Telling our students of that sad chapter in our history is no “looney Marxist” theory.

As for the frontal assault on tenure, Patrick needs to stop politicizing a policy that grants academic freedom in a place where it should be honored, not vilified for political gain. 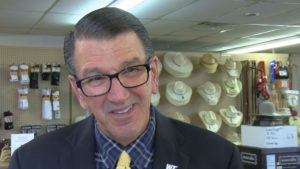 Walter Wendler is hitting the road. He plans to travel through all 26 Texas Panhandle counties, visiting 50 high schools across the region in a sort of student-recruitment tour.

He is looking for potential WT students.

Wendler received pair of cowboy boots from the school’s Agriculture Development Association. I am guessing he’ll wear the boots as he treks across the Panhandle, spreading WT’s message to prospective students.

Wendler told KFDA NewsChannel 10: “Many of our students who come from rural settings come with tremendous values about hard work and being committed. We want to reinforce that and continue to shape WTAMU to be based on those same values that come out of the small communities in West Texas because we think those values are rock solid.”

WT faces challenges as it seeks to build on its regional presence. Students are naturally going to be drawn away from home just for the sake of experiencing a new environment. It’s natural, of course, for young people to seek new adventures, to leave the proverbial “nest.”

Wendler’s Panhandle tour could be seen as an effort to keep our young people closer to home, to give them an education they can use to help the communities from which they come.

I like the idea of the WT’s biggest man on campus is hitting the road to make the pitch for the school he leads into the future.