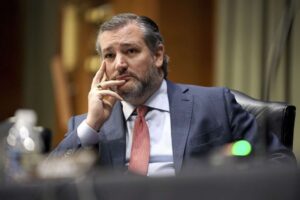 Leave it to the Cruz Missile to blast his way into raw demagoguery.

Sen. Ted Cruz was just so darn angry at Democrats because, in the wake of the Boulder, Colo., and Atlanta massacres, they seek to limit wackos’ ability to purchase firearms.

He said those attempts are just another effort to make it harder for “law-abiding citizens” to “keep and bear arms” as guaranteed by the Second Amendment to the U.S. Constitution.

Which begs the obvious question: If a citizen obeys and abides by all the laws, then what in the hell is the problem?

According to the Boston Globe:

“But what they propose, not only does it not reduce crime, it makes it worse. The jurisdictions in this country with the strictest gun control have among the highest rates of crime and murder,” Cruz said, reiterating a false talking point peddled by gun rights groups including the National Rifle Association.

In fact, research completed on the subject thus far points to the opposite conclusion. One study, led by Boston University School of Public Health researcher Michael Siegel, found that “states with higher rates of gun ownership had disproportionately large numbers of deaths from firearm-related homicides.”

Cruz, a Texas Republican, is among the many congressional GOPers who cannot bring themselves to buck gun lobby that opposes efforts to legislate remedies to the gun violence that kills tens of thousands of Americans every year.

What we have on our hands is a uniquely American problem, given the way our Constitution has been perverted at times by those who believe that bearing arms means we should be able to own any weapon we desire.

Jeff Swanson is going to require the baddest bouncer on Earth when he starts serving alcohol at the gun range he operates in Oklahoma.

Swanson operates the Wilshire Gun Range, which recently received permission from the Oklahoma City Council to serve alcohol on the premises.

Someone needs to explain this one to me.

He’ll be serving alcohol, but once someone buys the beverage, they’ll be disallowed from going onto the firing range itself.

The council vote as 6-3. One of the “no” votes came from Larry McAtee, who said, “Alcohol is legal and guns are legal. I have a problem with mixing the two.”

Still, Swanson said anyone who orders a drink will have his or her driver’s license scanned, it will be flagged and the individual will be disallowed from going to where they’re firing weapons.

The proprietor had better hire people with the sharpest eyes and ears possible to enforce the rules at his gun range. This decision makes me nervous.