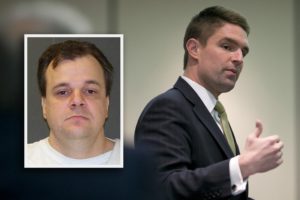 It’s called the “law of parties.”

The law means that in Texas someone who’s involved in any way with a capital crime — a murder — can be put to death if convicted even if he or she didn’t actually commit the crime.

I probably had heard of it, but I’d forgotten about it.

Jeff Wood is scheduled to die for a crime he technically never committed. He shouldn’t have to pay the ultimate price for his role in a 1996 murder. The actual gunman has been executed already.

Wood, though, has an most unlikely ally in the Texas Legislature. State Rep. Jeff Leach, a Plano Republican, has come to Wood’s defense, arguing that Gov. Greg Abbott should commute Wood’s death sentence to life in prison.

What’s interesting to me is that Leach is considered one of the Legislature’s more conservative members. He said he still believes in capital punishment, just not in this case.

I’m with Leach on this one.

Wood was driving a pickup in Kerrville when his friend, Daniel Reneau, went inside a gas station to steal a safe. The clerk inside would comply with Renau’s demands, so Reneau shot him to death.

He was convicted of capital murder and was put to death in 2002.

Prosecutors at the time of trial argued that Wood knew that Reneau would kill someone while committing the robbery, which made him culpable — under state law — to murder in accordance with the “law of parties” provision.

According to the Texas Tribune. Leach “believes in the death penalty under the law of parties in cases where the accomplice was clearly involved in the murder. But when he came across Wood’s case during his work for the House Criminal Jurisprudence Committee, it didn’t seem right.”

Wood surely should never have been in the vehicle while his friend was committing the terrible crime. He made a patently egregious decision. Should he pay for it, though, with his life?

I say “no.” He didn’t commit the actual crime of capital murder.

Rep. Leach is asking the Texas Board of Pardons and Paroles to recommend a commutation. Gov. Abbott has the option of accepting or denying the recommendation.

I hope the governor can reach the same determination that one of his Republican colleagues has reached.

A federal judge has ruled that a critical part of the Texas anti-abortion violates the U.S. Constitution.

The judge is Lee Yeakel, who presides over the U.S. District Court’s Western District of Texas. His ruling declares that a provision in the law that requires abortion clinics to meet the same standards as hospitals puts an unfair restriction on a woman’s right to obtain an abortion if she chooses.

Thus, the fight will continue. The state is certain to appeal this ruling. The leading candidate for governor, Republican Attorney General Greg Abbott, is a strong supporter of the law; his Democratic opponent, state Sen. Wendy Davis, rocketed to national political fame when she led a filibuster in 2013 to “kill” temporarily the bill that would become state law.

Yeakel ruled that the intent of the law was to close only existing licensed abortion clinics. The law, he said, goes too far in establishing the stricter standards on par with ambulatory surgical centers.

So, why the curious turn here?

I’m as certain as I’m sitting here that we’re going to hear comments from critics of the ruling declare their disgust with “unelected” federal judges overreaching and “writing laws from the bench.”

Again, this is the beauty — not the bane — of the federal judicial system. Judges aren’t beholden to their political benefactors, the politicians who select them for these lifetime jobs.

Abbott says he’ll appeal the ruling to the Fifth Circuit Court in New Orleans, where he thinks he’ll get it overturned.

Would those judges be overreaching and writing laws from the bench?