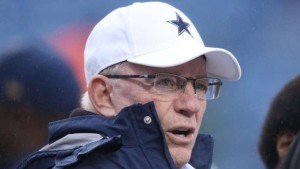 Jerry Jones engenders fairly strong emotions among those who follow professional football in the United States of America.

He bought a team in 1989 and then fired the only coach the team ever had, the iconic Tom Landry. Then he decided to forgo hiring a general manager and he took over the job himself. He made some comment at the time about getting involved in “everything, including washing jock straps.” (I know it’s not a precise quote, but it’s close enough.)

How have the Dallas Cowboys done since then? Well, they’ve won some and lost some. Yes, they have won three Super Bowls since Jones took over as owner. Still, the team, it’s safe to say, has fallen far short of the expectations its brash new owner set for it.

The word on Jones ever since he bought the team, though, is that he’s not necessarily a good “football guy.” Brilliant businessman, sure.

Now he’s popping off about the effect of the sport in which he participates on a brain disorder called chronic traumatic encephalopathy.

The good “doctor” says there’s no connection between gigantic men colliding full-force into other men, knocking them senseless and then being afflicted with CTE. He calls assertions linking football to CTE “absurd.”

Jerry Jones needs to have his own head examined.

He said the National Football League lacks sufficient data to suggest the existence between CTE and the collisions that occur on the football field.

I do believe Jones is seriously — and tragically — mistaken.

Thus, I should recommend that Jones watch a brilliant PBS documentary that got the nation’s attention a couple of years ago. “Frontline” broadcast “League of Denial” that chronicles a gripping series of cases involving men whose lives were shattered by CTE.

What did these men have in common? Every one of them played competitive American football.

“Frontline” peeled the skin off a disorder that has shattered many lives. Insufficient data? It’s out there, Jerry. Really.

The NFL acknowledges it. So should the owner of the Dallas Cowboys. 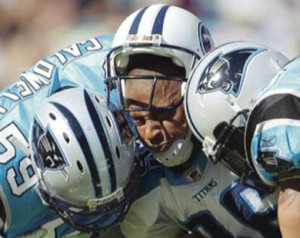 What once was professional football’s dirty little secret has been exposed yet again by revelations surrounding the death of a sports icon.

Chronic traumatic encephalopathy afflicts an alarming number of former football players. The National Football League for years denied that it was a problem among its athletes.

Now the word is out that Frank Gifford, a Hall of Fame wide receiver for the New York Giants, suffered from CTE when he died recently of “natural causes.”

CTE has returned to the head of the line of issues that Americans are discussing. I wrote about it for Panhandle PBS.

It saddens me to no end to hear former great players such as, say quarterback Brett Favre, say that he won’t allow his children to play football. Indeed, Favre had his bell rung more than once during his great career with the Green Bay Packers, New York Jets and Minnesota Vikings. I pray that CTE won’t claim him, but he is concerned about whether his own children would be safe playing a game that brought their father so much fame and financial reward.

PBS’s acclaimed documentary series “Frontline” blew the lid off this issue with its “League of Denial” special broadcast more than two year ago.

The NFL has to come to grips with this situation. It’s already settled a huge claim made by its players association to compensate players and their families for the damage caused by these head injuries.

However, much more needs to be done to make the game as safe as possible for the athletes who take the field.

Are you listening, NFL executives?

It’s fascinating to me to watch the media get all exercised and worked up over deflated footballs and whether one of the Super Bowl teams cheated its way into the big game.

Meantime, another actual crisis is festering and no one talks publicly about with the same fervor we’ve heard in recent days about “Deflate-gate.”

I want to mention it because Frontline, the acclaimed PBS documentary series, recently rebroadcast its special on this matter. It has gotten next to zero attention, as sports media — and even mainstream news talk shows — have fixated on whether the New England Patriots purposely deflated footballs in their AFC championship rout over the Indianapolis Colts.

“League of Denial” chronicles what some have said has been the National Football League’s complicity in some of the brain injuries players have suffered. Indeed, some current and former NFL stars — former quarterback Brett Favre comes to mind — have declared they won’t let their sons play football for as long as they can control their sons’ activities. Why? The sport is too dangerous, they say.

The Frontline special can be watched online. It’s worth seeing over and over.

Perhaps it will awaken us to a real scandal about the health and welfare of professional athletes who take a beating that no human body can withstand.

I’m not predicting it, but the snowballing of news about concussions among professional football players could signal an end to the game as we’ve known it since its inception.

Former Chicago Bears quarterback Jim McMahon — one of the game’s more colorful characters — is suffering from early-onset dementia likely caused by the many hits he took while playing the game.

He’s not alone. Many others have reported suffering similar symptoms. Their ranks are growing right along with the numbers of tragic consequences.

Should the game be declared too dangerous to continue? No. But oh brother, the debate over how to compensate these athletes is just now getting revved up.

The National Football League this week announced a settlement that provides $765 million in relief to battered players. The PBS program Frontline is set to explore the subject in detail in a two-hour special to be shown on Oct. 8 (at 8 p.m., on KACV-TV).

The concussion problem likely isn’t new. It’s been a part of the game since its founding. These days, though, the players are bigger, faster and stronger than ever. They hit harder. Human skulls, however, haven’t gotten more durable. They’re the same as they’ve always been: susceptible to damage caused by repeated blows to the head.

This national discussion is not going to fade away any time soon. Nor should it.

The men who play professional football, it now seems apparent, are putting their lives on the line when they suit up. Yes, they’re big and strong and they play the game likely understanding the consequences of getting hit repeatedly by their equally big and strong colleagues.

That doesn’t make it any easier to hear stories like the one Jim McMahon and many others are telling about their slow decline toward death.

ESPN prides itself, we’re led to believe, on its courageous reporting on sports-related issues.

Which brings up the question: Why did the nation’s No. 1 sports network bail on a PBS project that examines the outbreak of concussion-related trauma being suffered by professional football players?

Was it pressure from the NFL, with which ESPN has a long-standing — and highly lucrative — financial partnership? It smells like it.

Frontline is an award-winning documentary series broadcast by PBS. The program, based out of WBGH-TV in Boston, is set to air a two-part series called “League of Denial,” in which it looks at the concussion rate among NFL players and examines whether playing professional football has become hazardous to the health of its participants.

The early indicators are that the concussions are becoming a grave concern.

ESPN was supposed to be a partner in the project. It backed out this past week. ESPN said the NFL applied zero pressure to the network, even though there have been reports of a extremely testy meeting between ESPN and NFL Commissioner Roger Goodell.

OK, the news isn’t all bad.

Frontline will present the broadcast, even without ESPN’s participation. It airs on Oct. 8 and 15, and will be shown in the Texas Panhandle on KACV-TV, the region’s public television station operating on the Amarillo College campus.

ESPN does its share of in-depth sports journalism, particularly with its “Outside the Lines” specials. They produce occasionally riveting and, if you’ll pardon the pun, hard-hitting examinations of the lives of prominent athletes.

As the network has shown, though, in cratering on the Frontline project, it is capable of missing a tackle or two.