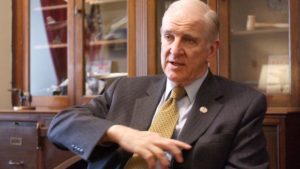 I met a most interesting gentleman this morning, someone who almost immediately after extending his hand to greet my wife and me invited me to come to Fairview’s town hall to familiarize myself with the community’s political climate.

This fellow is a member of the Fairview Town Council. I am reluctant to give you his name, as he doesn’t know I’m writing about him. Maybe I’ll divulge it later.

Our relocation has been pretty smooth and seamless as we have settled in this community tucked between Allen and McKinney in Collin County. My wife and I are registered to vote now in our new community of residence, which removes any chance for us to vote in Randall County, where we lived for 23-plus years.

I wanted to vote in the race for 13th Congressional District. That won’t happen now. We’ll get to vote for a new representative in the 3rd Congressional District, which has been represented since 1991 by U.S. Rep. Sam Johnson (pictured), a former Vietnam prisoner of war. Johnson is retiring at the end of the year.

I’ll need to study up on the individuals seeking to succeed Rep. Johnson.

My new friend from Fairview implied that next year’s municipal election will be a contentious affair. He didn’t go into detail; the setting of our meeting this morning made it difficult for him to spend too much time explaining what he implied.

My career took me to Amarillo in January 1995. My job as editorial page editor of the Amarillo Globe-News required me to get acquainted in a hurry with the political lay of the land, just as it had required the same of me in Beaumont, when we moved to the Gulf Coast in the spring of 1984.

I have no job requirements these days. However, my instinctive nosiness — which was bred and nurtured by nearly four decades in print journalism — compels me to sniff around at Fairview’s Town Hall.

So, I believe I will seek to satisfy my nosy nature by continuing this relationship with my new acquaintance.

Hey, my retirement doesn’t render me disinterested … you know?