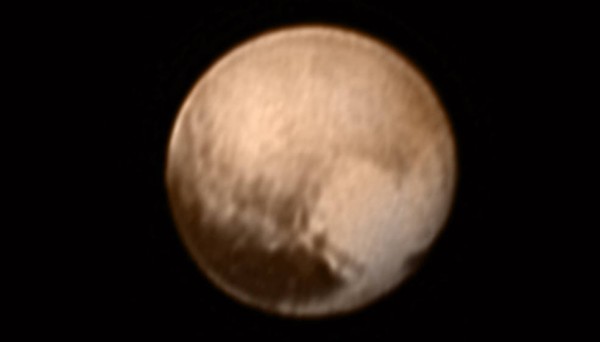 My friend Dan has it right.

Pluto deserves planet status. None of this dwarf planet nonsense.

The picture here is taken from a spacecraft that any day now is going to zoom right past the ninth planet in our solar system.

It’s small. It’s cold — as in, well, beyond frigid! It doesn’t have life, that we know of.

Astronomers demoted Pluto some years back. They called it a dwarf planet.

But it has five moons orbiting it. How many does Earth have? Just one. We’re a planet, though. Pluto is a dwarf.

We’re about to get an up-close-and-personal look at Pluto.

I echo my friend: Return it to planet status! As Dan says: “Don’t listen to those astrologers! Pluto is real!”

So help me, I wish Earth Day was a bigger deal than it has become.

For a whole day — as if that’s enough time to honor the only planet we have — we’re supposed to put Earth on the top of our mind’s awareness.

This is the 45th annual Earth Day. Many communities around the world are going to have public events to commemorate the day. That’s fine. I welcome all the attention that will be paid to Earth until the sun comes up tomorrow.

Given that it was created 45 years ago, that means Earth Day began during the Nixon administration. I doubt President Nixon really paid a lot of personal attention to the condition of the planet, but I certainly applaud that it was during his years in the White House that the Environmental Protection Agency was created.

In the decades since Earth Day’s creation, though, it has become something of a political flashpoint.

Some of us believe the planet is in peril. Our climate is changing and yet humankind keeps doing things to the planet that exacerbate the change that’s occurring. Deforestation is one thing. Spewing of carbon-based emissions is another. Some of say we need to do a better job of protecting our planet — or else face the consequences, which are as grim as it gets. Hey, we have nowhere else to live — for the time being, at least.

Others of us say there’s little we can do. Climate change? It’s part of Earth’s ecological cycle. We need to accept the inevitable and not seek to destroy our industrial base to chase after a cause that is far too big for mere human beings to tackle.

For the time being, I am at least grateful that the world sets aside a day to honor the good Planet Earth.

We ought to do it every day of every year.