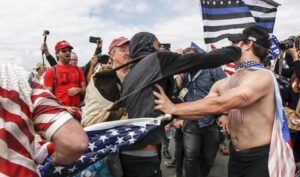 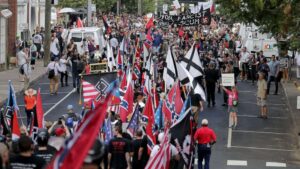 It is about damn time!

For the past four years, we have paid too little attention, or exerted too little emotional capital on the scourge of domestic, home-grown, corn-fed terrorists who hide in plain sight in our midst.

They presented themselves in full force on the Sixth of January when they marched to Capitol Hill, smashed their way into the Capitol Building, killed five human beings and threatened to stop the democratic process of certifying the results of a free and fair election.

President Biden has introduced the term “domestic terrorists” to the current lexicon, reviving it in the face of what the entire world witnessed early this past month.

Did the Donald Trump administration act on that statement? Did it call out the proverbial cavalry to answer the call to root out the terrorists? No. It didn’t. Instead, we heard the president of the United States say in 2017 that there were good people on “both sides” of a dispute that erupted in Charlottesville, Va., between counter protesters and — get this — the Ku Klux Klan, Nazis and assorted white supremacists.

Yep. Donald Trump sought to elevate the Klansmen and Nazis to the same moral level of those who fought against them.

That cannot continue. Thank goodness we now have a president, Joe Biden, who knows better than to utter such moronic rhetoric out loud. You see, words have consequences and it is time this nation deal forthrightly with the terrorists who live among us.

The leadership required to commence that fight has just taken office in Washington, D.C. I believe the battle must be fought at least as long and hard as we are fighting the overseas enemies … and we mustn’t back away from calling what they are.