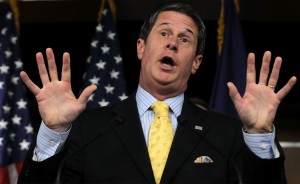 Edwin Edwards once was, shall we say, a colorful Louisiana politician.

When I think of the former Democratic governor I think of two quotes attributed to him. One was that the only time he’d ever lose an election is if he got “caught with a dead girl or a live boy.” Another alleged Edwardsism goes that the people of his state not only expected their politicians to be crooked, they “demanded it” of them.

Well, today the voters of the Pelican State showed a different side of themselves. They rejected Republican candidate David Vitter’s bid to become governor and elected instead a Democratic state senator, John Bel Edwards … no relation to the infamous former Gov. Edwards.

Vitter, you see, is a sitting U.S. senator who in 2007 was caught fooling around with a prominent District of Columbia madam. His name appeared in some hookers’ black books.

In deeply conservative and Republican Louisiana, Vitter was thought to be the prohibitive favorite to become the next governor, replacing Republican Gov. Bobby Jindal. Then Edwards, a former Army Ranger who had served in Iraq, launched a vicious attack ad that accused Vitter of “choosing prostitutes over patriots”; the ad took aim at Vitter’s Senate votes against veterans benefits.

Vitter’s campaign sought to portray Edwards as a liberal in the mold of President Obama, hoping that the president’s unpopularity in Louisiana would — if you’ll pardon the pun — turn the trick.

I am heartened, though, to see that Louisianans decided they’d had enough of Vitter’s foolishness. They turned their back on a well-known incumbent senator who had sought another office back home — in the state that knows him well.

Perhaps, it turns out, they know him a little too well.