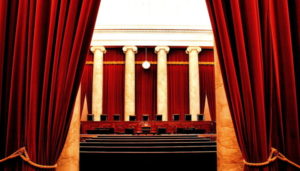 Hell hasn’t exactly frozen over, but the rare moment of my agreeing with a conservative legal scholar has arrived.

Jeremy Dys writes in The Hill that there exists no clear reason to expand the ranks of the U.S. Supreme Court, or to “pack” it to make it more palatable to us liberals.

I happen to agree with him.

Furthermore, I wish the lefties among us would just pipe down and let the judicial branch of our federal government do the job granted to it by the U.S. Constitution.

Dys and I come at this from different perspectives. He believes the court’s “center-left demise” has been exaggerated. I happen to believe that elections have consequences, as we learned to our dismay — I hasten to add — with the election in 2016 of the moron who got impeached twice by the U.S. House of Representatives.

He exited the White House in disgrace. However, he was able to nominate three individuals to the high court and much to the surprise of many of us, the judicial troika he selected hasn’t fallen in lockstep with whatever judicial philosophy POTUS 45 wanted them to follow.

No reason to pack the court | TheHill

Justice Stephen Breyer is not sending any strong signals that he is about to retire from the court. The liberal justice’s successor would not change the ideological balance on the SCOTUS. I do have a fear that if the GOP gets control of the Senate after the 2022 election that its leadership will stall any nomination process the way it did in 2016 when Justice Antonin Scalia died and the Senate denied President Obama the chance to select a successor to the conservative judicial icon.

But that’s how it goes.

I just dislike the notion of monkeying around the size of the Supreme Court because the politics of the moment do not suit one side of the political divide. 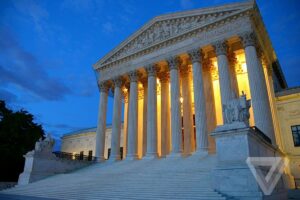 Listen up, my progressive friends. I am going to say something that will pi** you off.

U..S. Senate Democrats are seeking to do something that I fundamentally oppose. They want to add four seats to the U.S. Supreme Court, packing it with justices more to their liking.  That is a bad call.

What we have here is a slippery slope that can do as much harm over the longer haul than any “repair” that Democrats think will occur were Congress to actually agree with packing the court.

I now feel compelled to stipulate that I do not like the philosophical composition of the Supreme Court. It comprises six conservative justices and three liberals. Donald J. Trump nominated three of the justices and got them approved during his term in office. Did it infuriate me? Yes. It did, particularly after Senate Republicans denied President Obama the opportunity to have a justice seated after the sudden death in early 2016 of conservative icon Antonin Scalia.

As they say, elections have consequences. Trump was elected in 2016 and then Republicans who ran the Senate were able to confirm three Trump SCOTUS nominees.

But is the proper response now to expand the court, allowing President Biden to nominate justices who would grant liberals the judicial edge on the Supreme Court? No. It must not happen.

Why not? Because such a dramatic notion gives conservatives an opening to respond in kind were they to regain the White House and regain control of the Senate. Might they want to add another two seats, expanding the court to, say, 15 justices, allowing a GOP president and Senate to construct a conservative majority?

Let’s be real. The Constitution does not specify how many justices should sit on the high court. Indeed, the number has changed over the two centuries of our republic. Nine of them have presided for many decades. The number of justices is sufficient.

As for the court’s philosophical makeup, elections and attrition ought to be allowed to determine the SCOTUS composition.

President Biden is on record opposing court packing. He wants a commission to study high court procedures. Biden plans to set a 180-day period for a panel to make its recommendations on how we might reform the court.

Let’s tinker around the edges of that process. Packing the court with four new seats, though, is the wrong path to take. 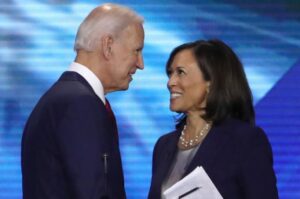 Joe Biden and Kamala Harris, the Democratic ticket seeking to defeat Donald Trump and Mike Pence, are performing a clumsy dodge when it comes to a simple, straightforward question.

It is this: Do you endorse a plan to add members to the U.S. Supreme Court in the event Judge Amy Coney Barrett gets confirmed to the seat vacated by the death of Justice Ruth Bader Ginsburg?

Many progressives are alarmed at the addition of another conservative to the high court and they want to add at least two seats to the nine-member bench presumably with progressives/liberals to, um, provide some ideological balance.

The move might pick up steam if Democrats gain control of the U.S. Senate, which is looking more plausible each day we draw closer to the election.

Biden and Harris have danced all around the question about whether they back such an idea. For the record, I happen to oppose it. The court has been a nine-member body for more than 150 years and it should remain that way. Even the late Justice Ginsburg opposed the idea of “packing” the court.

Donald Trump and Mike Pence are raising a ruckus over Biden and Harris’s refusal to answer the question. To be candid, they do have a point. Biden said he will make that decision public “after the election.” Harris, when asked during her VP debate with Pence this past week, turned the discussion instead to the “packing” being done by Republicans who are filling lower-court bench seats.

Biden and Harris need not provide the Trumpkins with ammunition to fire at them down the stretch of this campaign.

Just answer the question. No matter what they decide, rest assured that the Democratic Party presidential ticket will continue to have my support. Honest. Really and truly.

The National Review Online is supposed to be a respected publication.

The editorial attached to this post, however, suggests that the folks who run the publication fail to understand a key component of the U.S. Constitution. It’s the part that gives the president of the United States the authority to make critical executive and judicial branch appointments.

The NRO is upset with Senate Democrats’ decision to invoke the so-called “nuclear option” as it relates to the filibuster. Senate Majority Leader Harry Reid took the highly risky step as a way to allow President Obama to have his appointments cleared from a Senate that had obstructed them through the use of the filibuster. It once took 60 votes out of 100 to break a filibuster. It now takes just 51 votes. The rule change involves all appointments except those involving the U.S. Supreme Court.

The Senate has nuked itself.

The NRO, though, says that the filibuster is secondary to what it says is the real reason for the action. “The filibuster is a minor issue; the major issue is that President Obama is engaged in a court-packing scheme to protect his dubious agenda, and Harry Reid’s Senate is conspiring with him to do so,” the NRO writes.

A number of judicial appointments have been blocked by Senate Republicans that have nothing to do with the qualifications of the men and women selected. Obama seeks to fill them because, well, he is the president and the Constitution gives the person in that office the authority to act. Yes, the Constitution also gives the Senate the right to “advise and consent” to the nominations. That role, though, should be on the basis of whether someone is qualified for the job.

I’ve long believed strongly in presidential prerogative. I’ve also believed that presidents who win elections have earned the right to pick whomever they wish to key positions. This might surprise some readers of this blog, but I supported the nomination to the Supreme Court in 1991 of one Clarence Thomas, despite the uproar that arose from his selection when a woman accused him of sexual harassment.

The complaint was never proved. Thomas was qualified to serve on the highest court. Was he the kind of judge I would have picked? No. That job, though, fell to the man who was elected president in 1988, George H.W. Bush. Therefore, the president had earned the right to seat someone of his choosing on the court.

Barack Obama has precisely the same right as any of the men who’ve served before him. The Senate shouldn’t serve as a place where these nominations are stopped because of some trumped-up scheme manufactured by his political opponents.

Court-packing? Give me a break. President Obama’s job involves making appointments. Let him do that job and let the people he selects be examined on the basis of their qualifications.