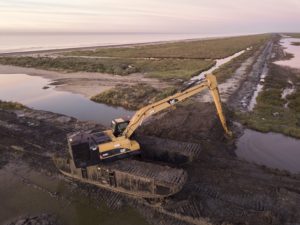 I want to give a shout out to my former neighbors along the Texas Gulf Coast.

They are working diligently to preserve one of the state’s most underappreciated resources: its beaches.

The Texas coast is in peril. It is disappearing before our eyes. It has been disappearing for, oh, many decades. I took an interest in the coast when I moved there in 1984 to take up my post writing editorials for the Beaumont Enterprise.

The Texas Tribune reports that Jefferson County officials are working with a consortium of industry officials, environmental activists, outdoorsmen and women and others to protect the coastal wetlands from drastic erosion.

According to the Tribune: Subsidence, sea level rise and storm surges have all contributed to significant land loss, averaging 4 feet per year along the state’s coastline, according to the Texas General Land Office. In some places, more than 30 feet of shoreline disappears underwater annually.

… Todd Merendino, a manager at the conservation-focused group Ducks Unlimited, said sand dunes used to line the shore near the Salt Bayou marsh, forming a crucial buffer between the Gulf of Mexico and the millions of dollars’ worth of industrial infrastructure that lie inland. The dunes are “all gone now,” he said.

“One day, you wake up and you go, ‘Wow, we got a problem,'” Merendino said. “And it’s not just an isolated problem where one swing of the hammer is going to fix it.”

The problem has inspired a coalition of strange bedfellows in Jefferson County. Local leaders, environmental activists and industry representatives are working together to execute a variety of projects — some bankrolled by BP oil spill settlement funds — to rehabilitate the marsh and protect the area’s industrial complex.

The massive deep freeze that is paralyzing the Deep South and the Atlantic Seaboard notwithstanding, the worldwide climate change that produces rising sea levels is a major culprit.

Gulf Coast officials are seeking to build a berm along the coast at the McFaddin Wildlife Refuge. I’ve been there. It’s a jewel along the coast. It’s a haven for all manner of waterfowl. It is a gorgeous part of the coastal region.

Here is the Tribune story

The Texas General Land Office once placed coastal preservation near the top of its public policy agenda. I am unaware of where that issue stands today. The GLO has welcomed the likes of David Dewhurst, Jerry Patterson and now George P. Bush as land commissioner since Mauro left the office in the late 1990s. I trust they, too, are committed to saving the coastline for future generations of Texans to enjoy.

I am heartened to hear about the hard work being done along the coast. It’s good, though, to bear in mind that Mother Nature can take whatever she wants, whenever she wants.

At least the state is not going to give it away without a fight.

Well, ruffle my hair and call me Frankie!

Texas Land Commissioner George P. Bush has made a commitment to a portion of the state that has been, well, seemingly kind of put on the back burner for too long.

Bush has pledged to make coastal protection a top priority of his during the 2017 Texas Legislature.

The last land commissioner to make such a pledge — and then follow through with it — was a Democrat. You might remember him. His name is Garry Mauro who, in 1998, had the misfortune of running for Texas governor against an incumbent named George W. Bush. Gov. Bush mauled Mauro by more than 30 percentage points while cruising to re-election.

It was a shame that Mauro didn’t do better against George P.’s Uncle W. He had held statewide office for well more than a decade and had done a creditable job as land commissioner.

I got to know him while working along that coast, in Beaumont. I was editorial page editor of the Beaumont Enterprise and witnessed a lot of Mauro’s commitment to protecting the coast.

He started coastal cleanup operations; he sought to protect wetlands from further erosion. He was a coastal region champion.

That emphasis went by the wayside at the General Land Office during the administrations of David Dewhurst and Jerry Patterson.

Now we have another Republican, a first-time officeholder at that, committing publicly to protecting the coastline.

Bush already has taken steps to make good on his pledge, according to the Texas Tribune. As the Trib reports: “The office has partnered with the U.S. Army Corps of Engineers to develop a long-term plan to address problems in the Houston Ship Channel and the Corpus Christi area in order to ‘ensure that Texans receive fair treatment following tropical storms and hurricanes.”‘

My wife and I moved from the coast to the High Plains of Texas more than two decades ago, but my own interest in coastal matters has remained high … even though I haven’t written much about them on this blog.

I am heartened to hear the land commissioner make a public commitment to strengthening the coast, which faces hazards every year during our hurricane season.

The coast ought to matter to the entire state.

I’ll offer George P. Bush one suggestion: Get on the phone and call Garry Mauro and ask him for some advice on how to proceed with ensuring greater coastal protection.

Hey, you can do it private, P. No one has to know.