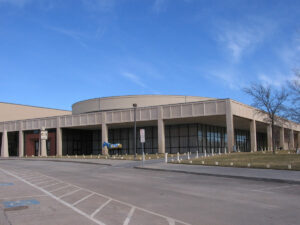 I guess there’s just no pleasing some folks.

My former neighbors in Amarillo griped about the alleged lack of attention the city was giving to its Civic Center while it was plotting the construction of the ballpark that would be named Hodgetown.

Then when they get a chance to approve a $275 million bond issue to, um, enhance the Civic Center and help the city attract conventions and top-tier entertainment events … what do they do? They vote it down!

Hmm. I guess the size of the tax bill attached to Prop A got to them. They must not want to spend public money on public venues to improve public entertainment and business activities.

Amarillo long has boasted one of Texas’s lowest municipal tax rates. I guess for now it’s going to stay that way.

Who in the name of civic responsibility is going to pay for it? 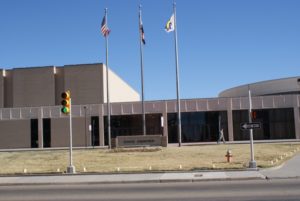 My friends up yonder in Amarillo, Texas, are going to vote on something called Prop A.

It’s a measure that would spend $275 million on extensive renovation/expansion/remodeling of the city’s 52-year-old Civic Center.

Were I still living in Amarillo I would be inclined to vote “for” the measure. Even though it would mean a significant boost to property taxes for many residents; I would be exempt because I am an old guy, so my taxes are frozen.

A friend sent me a message today that tells me the municipal property tax rate would jump 38.9 percent, adding 15.1 cents per $100 to property valuation. The city already boasts one of the lowest municipal rates in Texas, about 38 cents per $100.

So now the question becomes: What kind of return on investment does that tax increase bring? Proponents say it would bring convention business by the millions of dollars to the city; it would bring top-tier entertainment that passes Amarillo by because the Civic Center entertainment venue is so, um, lacking.

Can that return be measured the way we measure our property tax bills every year? No, but it’s tangible nonetheless.

Here’s the more interesting takeaway from this election. Amarillo is staging this election in the middle of a highly contentious presidential campaign. When the residents of that city vote on Nov. 3 whether to approve Prop A, they also will be voting for president. Turnout will be huge, man! The city has more than 100,000 registered voters; if 60 percent of them turn out to vote, that would give Prop A’s fate — up or down — the kind of mandate that is lacking in most municipal bond issue elections.

I am going to speak out once more in favor of Prop A. The city needs to improve its entertainment/business infrastructure if it hopes to keep pace with the growth that is occurring. It doesn’t come free. 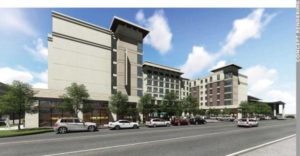 I attended a luncheon meeting today atop the Chase Tower in downtown Amarillo.

The office building looms 31 floors above the ground and from the top floor you can get a tremendous look across many miles of the sprawling Texas Panhandle landscape.

I chose to look down, though.

Peering east from the top of the tower I was struck once again by the vast change that’s occurring across the street from the Civic Center and City Hall.

The Embassy Suites hotel superstructure has been topped out next to the performing arts center. Next door is that parking garage that’s going to provide parking for several hundred vehicles along with some retail space on the ground floor.

My amazement continues to be at the sight of all that heavy construction downtown, the cranes towering over the sites.

We’ve lived here for more than two decades. During almost our entire time as residents of Amarillo, my wife and I have seen nothing approaching the level of activity that’s proceeding at this moment.

For too long the city appeared indifferent to the vitality and economic health of its central business district. Does that make as little sense to others as it does to me, that the city wouldn’t want to develop a clearly defined strategy to improve its downtown district?

Amarillo did that a few years ago when it ratified its Strategic Action Plan.

I am gratified to see the progress that is underway downtown.

I’ll reiterate that the progress looks pretty impressive when you can look at it from the top of downtown Amarillo’s tallest structure.