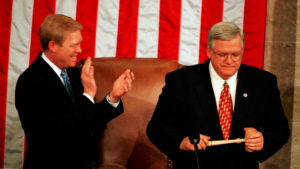 Something must have gotten past me.

A judge received more than 60 letters of support for a former U.S. speaker of the House of Representatives just before sentencing him to 15 months in federal prison.

It’s not the banking fraud that has everyone’s attention. It’s the reason for the charges to which former Speaker Dennis Hastert has pleaded guilty.

The letters reportedly were written mostly before the allegations of sexual abuse had been made public. They spoke to Hastert’s supposedly stellar character and devotion to his family.

But what about the charges that he hid hush money he was paying to boys he purportedly abused sexually while he was a high school wrestling coach?

The terms of Hastert’s guilty plea apparently limits his sentence to no longer than six months in jail.

Speaker Hastert allegedly led a hideous double life. He was a respected coach and equipment manager at the Yorkville, Ill., high school. Meanwhile, he allegedly lured at least four boys into compromising situations while traveling with them.

It’s almost too disgusting to ponder that a man who once was second in line to the presidency of the United States likely had did terrible things to young boys at an earlier time in his life.

I get that Hastert is in failing health. I feel terrible about the toll this case has taken on his family. However, the responsibility for that toll falls squarely on the former speaker.

Did he deserve any sympathy from the judge?

The judge, though, didn’t see it that way when he sent a “serial child molester” to the slammer.