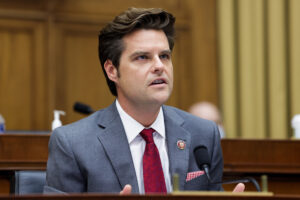 U.S. Rep. Matt Gaetz, who’s under investigation for alleged sex trafficking and for having sex with underage girls, needs to put a sock in his pie hole.

He has called Defense Secretary Lloyd Austin possibly “the stupidest person to ever serve in a presidential Cabinet.” Gaetz tore into the retired four-star Army general for decisions he made while he was in charge of Central Command and as defense secretary.

Gaetz, a Florida Republican, is known primarily for two things: for being a loudmouth and a blowhard and for being an unabashed supporter of the disgraced and twice-impeached former Liar in Chief.

Gaetz has challenged the integrity and the honor of the first African-American ever to hold the office of defense secretary. Lloyd Austin served with honor and dignity during nearly 40 years wearing the military uniform.

What about Gaetz’s service to the country? Has he thrust himself into harm’s way?