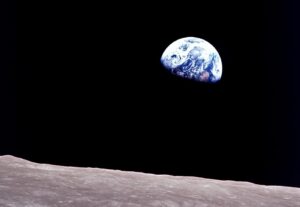 Astronaut Bill Anders pointed his camera out the window of Apollo 8 on Christmas Eve, 1968 and captured this never before seen image.

The astronauts aboard the first manned lunar mission then read from the Book of Genesis and wished us good tidings on “the Good Earth.”

This picture is worth looking at once again as the world celebrates Earth Day. Anders, along with crewmates Frank Borman and Jim Lovell, all told us upon their return from deep space that our planet looked so “fragile” to their eyes as it rose from the lunar horizon.

In the more than 52 years since this iconic photo was created, Earth has become even more fragile. Humankind has damaged our “Good Earth” through a number of environmental vices: too much carbon emission and deforestation has destroyed natural habitat and caused the gradual year over year warming of our planet. The effect of that warming, of course, has damaged our polar ice caps and put more of our wildlife in peril.

Bill Anders captured a wondrous moment to share with his fellow human beings. Only these men and those who followed them to the moon can understand fully just how fragile our planet was then and has become.

Our “Good Earth” needs to be strengthened. 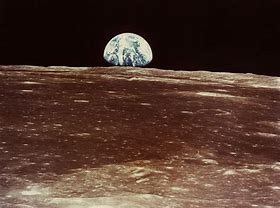 Those of us of a certain age and older remember 1968.

As we were living through it many of us wondered if we could survive, literally, and wondered if the nation could endure the tumult that tore at its soul.

The year began with that terrible Tet Offensive in Vietnam, where we were fighting a war that killed thousands of American service personnel that year. Two iconic figures, Martin Luther King Jr. and Robert Kennedy, died at the hands of assassins. The Democratic Party nominated a presidential candidate while thousands of people rioted in the streets outside.

Then in December of that terrible year, three men launched from Earth toward the moon, produced the image I have posted on this blog. They read from the Book of Genesis while orbiting the moon’s surface.

These men — Frank Borman, Jim Lovell and William Anders — reminded us of the fragility of our existence and produced a never-before-seen image of our “good Earth,” as Apollo astronaut mission commander Borman described it in his Christmas message back home.

The Apollo 8 moon mission was more than just a competitive event between the United States and the Soviet Union. President Kennedy in 1961 had declared that we should “send a man to the moon and return him safely to the Earth” before the end of the 1960s. We would accomplish that mission in 1969, beating the Soviets in that race to the moon.

Before that, though, we had to send a space ship to the moon to orbit it and to return. Little could we have foreseen the symbolism embodied in that mission at the end of a terrible, tumultuous year.

It could not have ended more perfectly than it did just before Christmas 1968. It could not have been a more apt remedy to help restore some semblance of hope in the face of the mayhem that gripped the nation and the world.

The mission was, shall we say, one for the ages.

Those three men saw fit to read from the Holy Bible about God’s creation of the universe. The words from Genesis served to remind us that the Almighty was looking after us.

The year began and progressed through storm after storm.It ended with the image flashed around the world for the first time ever of Earth rising in the black sky all by itself.

It is our home. Turmoil and all.

I am not prone to weeping openly. That is, I don’t just start sobbing when something pushes my emotional hot button.

But I tend to swallow hard, get a little choked up at sights. Historic videos do that to me.

I cannot, for instance, watch Muhammad Ali light the 1996 Olympic torch in Atlanta without getting teary-eyed; the same thing happens when I watch video of Secretariat winning the Belmont Stakes in 1973 and the announcer says he’s “running like a tremendous machine!”; ditto for watching Sen. Robert F. Kennedy say “on to Chicago and let’s win there” moments before the gunman wounded him mortally in Los Angeles.

So … I’ve been choking back tears this week watching CNN’s series on “The Sixties.” The segment this week dealt with the space race. The United States competed with the Soviet Union to be the first nation to land someone on the moon. We won that race. It was a come-from-behind victory, you’ll recall.

The segment that does it to me every time I see it is the launch of Apollo 8, the first lunar orbit mission that blasted off from Cape Canaveral on Dec. 21, 1968. The launch itself is an emotional moment for me. It reminds me of when my late mother and I would get up early to watch the countdown of those Mercury and Gemini launches. The thrill is something that has never left me.

The CNN series, though, takes you through the launch and quickly to the point where Apollo 8 commences lunar orbit with astronauts Frank Borman, Jim Lovell and William Anders aboard.

Then, on Christmas Eve 1968, Borman pulls out his Bible as he trains the TV camera on the Earth-rise over the moon’s horizon and he starts reading from the Book of Genesis … reminding us of our world that God created.

Yep, that chokes me up.

1968 was a hideous year. The Vietnam War was going badly; assassins killed Martin Luther King Jr. and RFK; our streets were erupting in chaos as Americans protested the war.

Then, to have the commander of a space mission read on Christmas Eve from the passage in the Bible that takes us back to the beginning of our very existence in the universe …

As Tom Hanks says on the CNN segment, “Who wrote that script?”