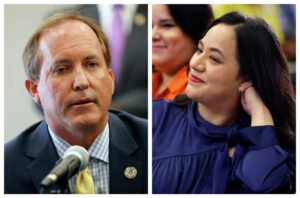 Democrat Rochelle Garza wants to become Texas’s next attorney general. She is running against a seriously flawed incumbent, Ken Paxton, who already has been re-elected once while running with a felony indictment hanging over his head.

Garza, though, has a curious bit of baggage as she seeks to defeat her Republican opponent. She is a lawyer steeped in the tradition of the American Civil Liberties Union. She fights to protect our civil liberties, you know, those lined out in the Constitution.

She’s also not scarred by the kind of wounds inflicted on Paxton. A Collin County grand jury indicted Paxton in 2015 on an allegation of securities fraud. He hasn’t stood trial yet.

However, in this curious and infuriating political climate, Garza must defend her work as a civil liberties lawyer. It’s a throwback to an earlier campaign, the 1988 presidential election between Vice President George H.W. Bush and Massachusetts Gov. Michael Dukakis.

President Bush vilified Dukakis because of the governor’s belief in the ACLU mission, which is to protect our civil liberties.

I keep wondering: How did ACLU membership and a defense of that legal organization’s mission become a punchline, an epithet, a four-letter word?

It has become all of that.

For my money, I would rather be represented by a legal eagle who isn’t stained by allegations of misconduct. Toss aside political affiliation and ask: Do you want to be represented by an individual who faces possible prison time if his case ever gets adjudicated, or do you want your AG to be someone whose record is clean and clear of any suspicion?