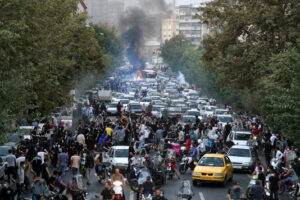 Mahsa Amini’s identity, I believe, well might become a household name soon in a place where one wouldn’t expect.

That would be the Islamic Republic of Iran. Amini was a 26-year-old Iranian woman who was taken into custody and who later died. Why? Because she showed a few too many strands of her hair outside the hijab she was wearing.

Women must follow certain conservative tenets of Islamic faith, such as ensuring their hair is tucked away. The penalty is the fate that befell Mahsa Amini.

Amini’s death has prompted protests the likes of which have rarely been seen or heard since the Ayatollah Khomeini’s forces seized control of Iran in 1979.

Iranians have marched onto city streets seeking justice for Mahsi Amini, who by any measure of human decency should be alive today. Indeed, she should be walking free in her country. But, oh no. She’s now dead because that hideously named “morality police” squad took her into custody and quite likely killed her.

As Time Magazine reported on its website, Mahsa Amini has become a martyr to a cause unknown in the power circles of the governing Islamic Republic: human rights.

On social media, her name became an Iranian version of #MeToo — a prompt for ordinary people to post experiences of loss and oppression at the hands of the Islamic Republic, gathered under #MahsaAmini.

The Protests in Iran Have Shaken the Islamic Republic to Its Core (msn.com)

The Islamic Republic of Iran has been on the U.S. sh** list of nations that flout basic human rights for its citizens.

Too often people become victimized in nations such as Iran. The world wrings its hands and calls go out for justice. Then the emotion subsides, and the world’s attention turns to other crises.

Let us not allow Mahsa Amini’s name to recede into the background. She needs to remain at the top of our consciousness and must become a cudgel for the civilized world to use against the Islamic Republic of Iran.