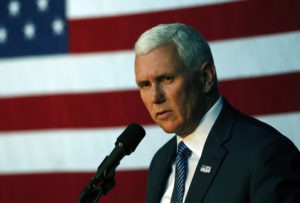 Many things have been known to escape my occasionally meager skills at understanding certain matters, such as …

How in the world does former Vice President Mike Pence remain so silent when the whole world now knows that Donald J. Trump didn’t give a damn whether he got hanged by the mob of traitors who stormed the Capitol on 1/6?

Testimony has been revealed that on the day of the insurrection, with mobsters carrying signs that said “Hang Mike Pence!” the then-POTUS didn’t lift a finger to quell the violence. Nor did he call the VP to determine whether he was safe. Nor did he salute the VP for doing his constitutional duty.

Oh, no! All that Trump said that day about the vice president was that “Mike Pence didn’t have the courage” to overturn the 2020 presidential election and that “Pence let me down.”

But the ex-VPOTUS won’t condemn in unambiguous language what many of the rest of us find repugnant beyond belief. That the president was derelict in his duty that day. That he violated his sacred oath of office. That he has never expressed a single public word of remorse over what happened on 1/6.

Pence has been at the center of this investigation. Yet he remains curiously silent about the behavior on that horrifying day of the man who incited the whole thing with The Big Lie.