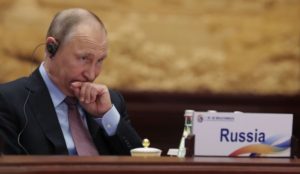 Vladimir Putin’s evil intent has been placed on full display for the entire world to make a simple determination, which is that he is a state sponsor of international terror.

The Russian goon today launched a missile into a crowded Ukrainian shopping mall. I haven’t yet heard the casualty count, although I understand that several civilians lost their lives in the terrorist attack.

Yes, that is what it was: a terrorist attack. Putin now intends to terrorize Ukrainian civilians. He is no better than Osama bin Laden, Pol Pot, Adolf Hitler, Saddam Hussein.

Putin’s conduct of the Ukraine War tells me that he needs to stand trial for his crimes against humanity.

Oh, no. Putin intends to terrorize Ukrainians into pressuring their heroic president to sue for peace at any cost.

That he would kill civilians on purpose tells me he is as untrustworthy as any human being on Earth.

This individual must pay for the crimes he is committing against humanity.