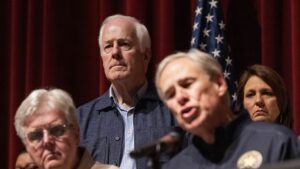 I am hearing from gun-rights apologists who suggest that laws designed to install universal background checks wouldn’t have prevented the lunatic from opening fire in Uvalde, Texas, with an AR-15 rifle.

Hmm. They ask: What laws would work to stem such a tragedy? My answer: I haven’t a clue, which is why I depend on my elected representatives to craft solutions that are too far above my limited knowledge and skill set.

However, in an editorial this morning, the Dallas Morning News is calling on John Cornyn, Texas’s senior Republican in the U.S. Senate, to show leadership, to reach across the aisle to work with Democrats — as he is capable of doing — in finding solutions to this sheer madness. The state’s junior GOP senator, Ted Cruz, is too wrapped up in blaming “Democrats and the media” for “politicizing” this tragic event. What horsesh**!

The DMN poses this: What if their killer, an 18-year-old, had been turned away at the gun store? What if he had just one or two obstacles in front of him on his way to destroying lives and terrorizing our country? Would those children be alive?

Lots of “maybe” to examine, you know?

I want Congress to explore the possibilities of turning “maybe” into commonsense public policy.