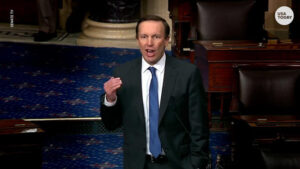 Chris Murphy is able to speak with a rare form of credibility on the tragedy that has struck once again in the United States.

Murphy is a Connecticut Democrat who represents a state in the U.S. Senate that has felt the pain we are feeling tonight in the wake of the Uvalde, Texas, school massacre.

“Just days after a shooter walked into a grocery store to gun down African-American patrons, we have another Sandy Hook on our hands,” Murphy said. “Our kids are living in fear every single time they set foot in the classroom because they think they’re going to be next. What are we doing?”

Murphy stood on the Senate floor today and pleaded with his colleagues to do something to stem the violence that erupted in South Texas. More than a dozen children and a teacher are dead along with the lunatic who opened fire at Robb Elementary School.

A decade ago, another madman opened fire at Sandy Hook Elementary School in Newtown, Conn., killing 20 first- and second-graders along with six educators before killing himself. President Obama called it the darkest day of his two terms in office.

What did we do then? Nothing!

What are we doing now? Sen. Murphy is asking the most relevant question possible in this time of national grief.

I am one American who will not accept any excuse that our Congress cannot enact laws that can do something to make it more difficult to commit these types of crimes. I will not listen to those who continue to proclaim that the Constitution prohibits any legislative remedy.

They are wrong and they should be ashamed.

Murphy continued: “This only happens in this country and nowhere else. Nowhere else do little kids go to school, thinking that they might be shot that day. Nowhere else do parents have to talk to their kids, as I have had to do about why they got locked into a bathroom and told to be quiet for five minutes just in case a bad man entered that building. Nowhere else does that happen except here in the United States of America, and it is a choice. It is our choice to let it continue.”