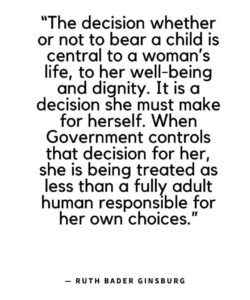 The nation is beating itself senseless over a leaked draft opinion from the U.S. Supreme Court that proposes to do the very thing that Justice Ginsburg feared.

The opinion suggests the court should toss aside Roe v. Wade, the ruling that legalized abortion in January 1973. Doing so, I fear, would turn women into “less than a fully adult human responsible for her own choices.”

The fight has commenced. The U.S. Senate will vote next Wednesday on legislation that provides federal protection for those seeking an abortion. It isn’t likely to pass, given the Republicans’ strategy to filibuster the bill. Since it takes 60 votes in the Senate to end a filibuster, such a move is virtually doomed in a 50-50 Senate.

Senate Majority Leader Chuck Schumer, though, wants to put his GOP colleagues on the record in opposing granting women the right to control their own bodies. Go for it, Mr. Leader.

Justice Ginsburg would be proud