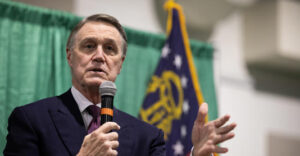 David Perdue began a debate in Georgia by declaring that the 2020 presidential race was “rigged” and “stolen” from the idiot who lost the contest.

Oh, then he said his own race for re-election to the U.S. Senate was stolen, too.

Perdue once served in the Senate until Jon Ossoff defeated him. He now says “the evidence is compelling” that he and Donald Trump were victims of “theft” from “widespread voter fraud” in Georgia.

No. He wasn’t. Neither was Trump.

The “compelling” evidence? We still have seen nothing.

The Big Lie needs to be squashed.