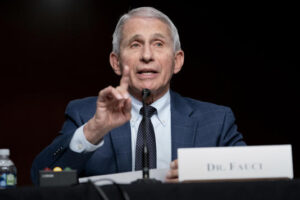 The ol’ “hot mic” caught another public official speaking the truth about a political adversary.

The “victim” this time was Dr. Anthony Fauci, who muttered “what a moron” after being berated by U.S. Sen. Roger Franklin, a Kansas Republican, about Fauci’s personal financial disclosure. The exchange took place Tuesday during a Senate committee hearing.

My request to the doc is this: Don’t apologize!

Franklin was berating Dr. Fauci over financial disclosures that Fauci said are a matter of public record. All anyone has to do is look them up on the Internet. Franklin wasn’t buying it. He didn’t know what he was talking about, Fauci said.

So, then he muttered the “moron” crack.

Hey, he was speaking the proverbial truth to power in that instance.

To my way of thinking, Fauci should say out loud and on the record that other GOP critics of his are “morons” for spreading lies and exposing the doctor’s family to threats of physical harm.

Are you listening, Sen. Rand Paul of Kentucky?