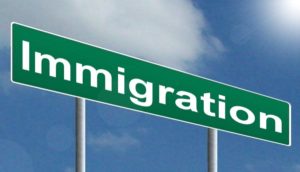 For as long as I can recall, the talk we hear about closing our borders to immigrants has been an ongoing topic of discussion, debate and demagoguery.

I can recall writing a column for the Beaumont Enterprise in the 1980s about those who wanted to slam the door shut on immigration. Hey, they got in, or their ancestors got into the country. Now that they were citizens of the world’s greatest nation, let’s just slam the door shut. Toss the key. Build a moat; fill it with filthy water and gators.

The anti-immigrant rhetoric isn’t uniquely American, either. Europeans from east to west, north to south have been yammering for decades about the unwashed masses pouring into their countries from, say, the Middle East. Political parties in Europe have emerged to challenge the status quo.

Let us not forget, too, that Europe gave the world the National Socialist Party — aka the Nazis. Their aim was to promote the “master race” and rid the world of people who worshiped the Jewish faith.

Today, though, the anti-immigrants have many more media weapons at their disposal to spew their rubbish. They contend that non-native-born Americans are “invading” the country, that they are going to push us native-born Americans out of the way. What nonsense. There cannot possibly be a more un-American policy than that. The government we honor today was created by individuals are the direct descendants of those who “invaded” the country in the 17th century. We are a nation built by immigrants. Thus, for our founders’ descendants to seek to ban more immigrants borders on treason … in my humble view.

Perhaps in a perverse and perverted way, that the anti-immigrant rhetoric would be gathering steam these days is merely a continuation of a scourge with which our nation has been dealing all along.