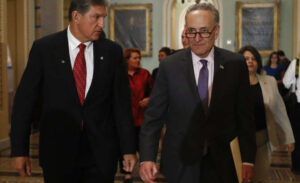 It took Joe Manchin a long time to state the obvious.

The West Virginia Democratic U.S. senator declared that “Civility is gone” after Senate Democratic leader Charles Schumer criticized Senate Republicans over their obstruction of plans to increase the debt ceiling.

Spoiler alert, Sen. Manchin: Civility has been MIA for a long time on Capitol Hill.

A single tirade by Schumer doesn’t signal anything new regarding the state of play between the governing parties.

Manchin reportedly buried his face in his hands and then walked off the Senate floor on Thursday after Schumer unloaded on GOP caucus members.

Look, I wish we could rediscover civil discourse as much as the next guy. Yes, even as much as Sen. Manchin. However, the major culprit in killing political civility — to my way of thinking — happens to be the Republicans who have sought to obstruct rather than govern.