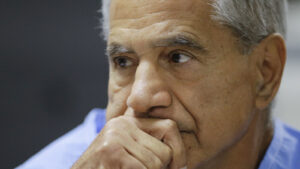 This bit of news is going to take some time to sink in.

I am still processing the announcement that Sirhan Bishara Sirhan will be paroled from the California prison system 53 years after he shot my first political hero to death in a hotel kitchen.

Sirhan murdered Sen. Robert F. Kennedy on June 5, 1968 moments after RFK declared victory in California’s Democratic presidential primary. Sen. Kennedy would linger for a day before succumbing. Robert Kennedy was 42 years of age and well might have been elected president of the United States. Hmm. Do you think his tragic death might have changed history’s trajectory? We were fighting a terribly unpopular war and Sen. Kennedy wanted to end it.

Let me stipulate that this recommendation does not make parole a done deal. It needs further review and final approval by the governor. However, the absence of any objection from prosecutors and the support of RFK”s family members suggest to me that it’s likely to occur. That Sirhan will walk out of prison.

Oh, my. How does one deal with this?

Two of the senator’s surviving sons, RFK Jr. and Douglas, both argued on behalf of Sirhan’s parole Douglas Kennedy said it is time to give way to grace and forgiveness. How in the world does one argue with the logic from the son of one of U.S. history’s more revered political figures?

I had hoped the 77-year-old Sirhan would spend the rest of his life behind bars. That won’t happen. He reportedly will live with his sole surviving brother.

No word, of course, yet has come from Ethel Kennedy, the slain senator’s wife who was there in the hotel kitchen when her husband was struck down; she was pregnant in that moment with the couple’s 11th child.

I am still trying to roll this one around. I cannot yet reach a decision on how I feel about Sirhan’s pending parole.

All I am feeling at this moment is renewed pain over the loss I felt at that moment when we got word at home in Oregon that RFK had been shot. I remember watching the returns from California. The networks declared Bobby Kennedy the winner and I went to bed a happy young man. I had the pleasure one week earlier of shaking the senator’s hand at a chance meeting in a restaurant parking as he finished campaigning in the Oregon Democratic primary.

Then my mother woke me up. She told me to come downstairs. I watched the horror of the event unfold in real time.

I am not going to express joy for Sirhan Sirhan’s release. I am saddened all over again.

One thought on “Sirhan gets parole … wow!”