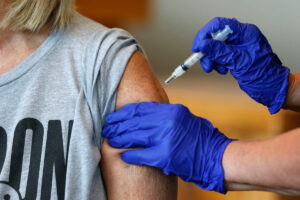 Houston Mayor Sylvester Turner is the latest Texas public official to take matters into his own hands regarding how his city should deal with the COVID-19 outbreak stemming from the Delta variant.

He says the city’s 22,000 employees must wear masks while on the job in public buildings and where social distancing is not possible. As the Texas Tribune reported: “The mayor has a right and responsibility to ask city employees to wear face coverings indoors to help stop the virus from spreading,” Mary Benton, a Turner spokesperson, said to the Houston Chronicle. “With the rise in the delta variant cases and high numbers of unvaccinated individuals, Mayor Turner is doing what is necessary to keep [city] employees healthy.”

This mayoral mandate comes in defiance of Texas Gov. Greg Abbott’s executive order that prohibits local officials — such as Turner — from issuing mandates that go beyond the state’s non-action.

Dallas County Judge Clay Jenkins this week removed County Commissioner J.J. Koch because Koch refused to wear a mask during a Commissioners Court meeting. Koch responded by threatening to sue Jenkins for issuing the mask order. OK, I shall mention that Jenkins is a Democrat and Koch is a Republican and their differing points of view on mask wearing falls right in line with the national partisan divide over how to deal with the COVID pandemic.

What will the local officials in our part of the state — in Collin County and neighboring counties — do in response to what I believe is Abbott’s heavy-handed response? Probably not much at all. I do not see much political courage in city halls and at the Collin County Courthouse on this matter.

Mayors, county judges, school board trustees and superintendents all know their communities. They all listen — or they should listen — to what their constituents are telling them. Mayor Turner took his community’s pulse and decided that he had the authority to act as the city’s chief executive, regardless of some dictatorial prohibition handed down from Austin by the governor.

I will stand with Mayor Turner. I also would stand with any public official who seeks to invoke their own health protection rules as well. I don’t want them necessarily to do any of this to spite the governor. I remain deeply concerned about the spread of this variant and the undeniable evidence that it is putting a terrible strain — yet again — on our stressed-out health care system.

For the governor to issue a no-new-mandate order even as the killer virus regains its dangerous strength is insulting on its face. Stay the course, Mayor Turner.