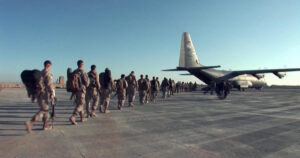 The effort to shield the men and women who worked with our fighting forces in Afghanistan is a noble effort that must be pursued at full throttle.

President Biden’s expedited withdrawal from the Afghan battlefield carries enormous risk. The Taliban will show no mercy to anyone left behind as we pull our forces out of there. Biden’s plan so far seems to lack the coherence one would expect from a seasoned political hand such as the president.

This isn’t the first time our nation has been forced to deal with the future of those who fought with us on these foreign battlefields.

I am thinking at this moment of a fellow I met in Vietnam while visiting that country in 1989. He drove what they call a cyclo — a motor scooter the Vietnamese use as taxi cabs. I hired this fellow for a day and we became friendly during my time in what used to be called Saigon, but which the government calls Ho Chi Minh City.

What made this guy so special is that he served with the 9th Infantry Division during the Vietnam War. He worked with the locals in the Mekong Delta and fought alongside our soldiers. We pulled out of Vietnam in 1973; the South Vietnamese army couldn’t hold off the North Vietnamese, who then conquered the nation in April 1975.

We didn’t rescue my cyclo driver friend. He ended up in what they called a “re-education camp,” a euphemism for prison.

I wrote about this fellow at the time of my visit. I couldn’t use his real name, as he was thought of himself as a marked man in Vietnam. He deserved better than what he got from the government he assisted during that long-ago war.

May the individuals who aided us in Afghanistan get the protection they deserve.