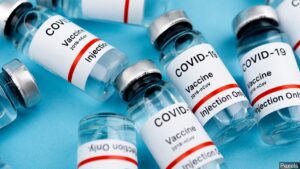 President Biden today all but declared war on fellow Americans.

These are the idiots among us who continue to peddle misinformation about the vaccines developed to help fight the COVID-19 virus.

I am rooting for the president to win this war.

He is seeking to stem the infection caused by the Delta variant, an offshoot of the pandemic virus that so far has killed more than 600,000 Americans. The vaccines are safe. They are effective.

And, no, as Biden said, they weren’t “rushed” into production. They were developed rapidly, yes, but under strict federal medical rules and regulations. The “rushed” argument has become a talking point among the anti-vaxxers who concoct reasons to avoid getting inoculated against the virus. President Biden today sought to bat that bogus argument away.

Biden is not sounding like a desperate politician. He is sounding like a pol who is concerned about lies diverting our attention from the truth at hand. It is that virtually all the new Delta variant infections are among those who haven’t been vaccinated against the virus.

To be sure, there are the scattered reports of fully vaccinated Americans being stricken by the variant. However, the refusal among Americans far outpaces those reports and the president today called out those — namely on the right — who continue to foment lies about the vaccines.

President Biden faces a monstrous reality, which happens to be the gullibility of Americans who are too willing to accept the lies and turn their back on the truth. Biden spoke the truth today. He invoked his executive authority to ordering all occupants of federal buildings to be vaccinated; I understand that number of could run into the millions.

That’s all fine with me. Joe Biden inherited a nation in dire medical peril. He had hoped to declare victory against the pandemic. It’s too early for that moment. First, he has to quell the lying and dissembling that is putting Americans at risk.

One thought on “Biden goes to war against liars”