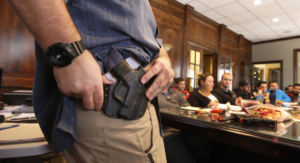 The Texas Legislature has approved a bill that allows any yahoo in Texas who wants to carry a gun to do so.

Yep. No need to take a test to prove competence with a firearm. No requirement for a license. Texas legislators say the U.S. Constitution is all the requirement anyone needs to pack heat.

Get this, though: The Legislature said you cannot carry a gun into the State Capitol Building, where legislators work! Hmm. Why is that?

I am reminded of the time back in the 1990s when a publisher with whom I worked in Amarillo questioned a state senator about a similar exception the Legislature sought when it considered its concealed-carry legislation. My boss, Garet von Netzer, quizzed the late Teel Bivins, an Amarillo Republican, why he and his colleagues won’t allow someone to “carry a six-shooter on their hip” when they walk into the Capitol. I don’t recall what Bivins said at the time, but von Netzer made a good point then … which is that if you’re going to allow Texans to arm themselves, then open it up to any venue in the state.

I only can presume that legislators have a secret fear of potential mayhem in the halls of state government when Gov. Greg Abbott signs this abomination into law.