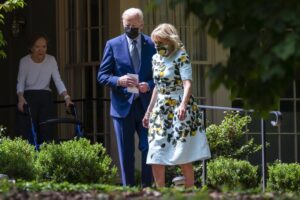 President Biden ventured today to Georgia to do two things.

He sought to tout the accomplishments of his first 100 days in office. Biden also paid a visit to one of his first political heroes, Jimmy Carter, the nation’s 39th president.

He said something, though, that I want to echo. “He showed us throughout his entire life what it means to be a public servant,” Biden said of Carter.

President Carter is 96 years of age now. His health keeps him home most of the time. He and his wife of 70-plus years, Rosalynn, have dedicated their lives to advancing the work of the Carter Center in Atlanta and, of course, in the former president’s efforts to build homes for Americans in need for Habitat for Humanity.

Biden was a young U.S. senator in 1976 when he endorsed the former Georgia governor’s bid for the presidency. That endorsement forged a friendship that has lasted all these decades.

At so many levels, President Carter has shown us how to serve others. The former president doesn’t appear intent on forging his own historical niche, but his commitment to serving others is worthy of high honor.