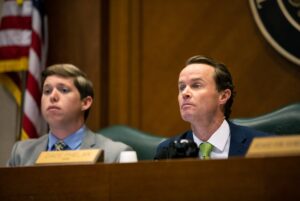 Admittedly, I am a long time and a long way from my days in Beaumont, Texas, covering and commenting on politics of the region.

So I am drafting this blog post with a bit of trepidation. It appears that a young man from that corner of the state is set to become the next speaker of the Texas House of Representatives.

He is state Rep. Dade Phelan, a Republican. He is the son of a prominent developer in the community, a fellow I knew only casually. Still, I feel only a couple of degrees separated from Rep. Phelan.

I wish him well if he musters the support he claims to have lined up to be elected speaker in advance of the 2021 Texas Legislature. Phelan succeeds a fellow who turned out to be an abject failure as speaker, state Rep. Dennis Bonnen, R-Angleton, who served a single term as speaker before deciding against running for another term in the House.

So, it’s one and done for Bonnen. The dude found himself in a meeting with a right-wing zealot who taped the event secretly. The two of them talked about Bonnen turning on 10 of his GOP colleagues, offering them as targets for Michael Quinn Sullivan, guru of Empower Texans, to defeat in the 2020 Republican Party primary.

Bonnen denied saying those things. Sullivan then produced the recordings of Bonnen deceiving his colleagues. Bonnen apologized. Then when the sh** hit the fan, he decided to retire from the Legislature. Now he’s about to be gone.

In steps Phelan, a young man who pledges to work across the aisle. He wants to curry favor with Democrats as well as Republicans … or so I have been led to believe.

That’s not a bad goal. Some previous House speakers have done well serving the entire body, not just the members of their own party. I think of Republican Joe Straus of San Antonio and Democrat Pete Laney of Hale Center; I happen to know Laney fairly well, as I covered him when I moved from Beaumont to Amarillo in early 1995. Texas House speakers can govern effectively if they adhere to the traditions of the Legislature, which include bipartisanship when it becomes necessary.

OK, so here’s the final bit of advice I for Rep. Phelan: Don’t speak privately to Michael Quinn Sullivan without frisking him to ensure he isn’t recording what you tell him.