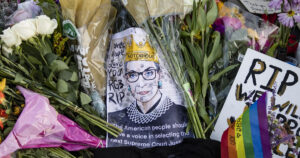 It has been said more times than I care to recall that “elections have consequences.”

That truism is playing out in real time as I write these few words.

Ruth Bader Ginsburg’s death has opened the door wide for the most unfit man ever to hold the office of president to nominate his third selection to the nation’s Supreme Court.

You want consequences? The court, if Trump’s nominee gets confirmed, will be locked in a solid 6 to 3 conservative majority possibly for a generation.

Yes, this is what we get when we elect someone with no moral compass, no ideological basis, no authentic sense of what justice really means to the nation’s highest office.

Trump says he’s going to nominate a woman to succeed Ginsburg.  I always am struck, by the way, at Trump’s use of platitudes to describe individuals. He calls Judge Amy Coney Barrett, one of the frontrunners to be nominated, as “fantastic,” that she’s a “brilliant lawyer,” that she’ll do a “great job.” What is missing in these platitudes is any sense that Trump knows anything of substance about the individuals he is considering.

How in the name of electoral power do we rectify what’s about to happen? I believe the first and perhaps last option is to ensure that Trump gets defeated, that Americans elect Joseph R. Biden as their next president. I know that electing Biden won’t undo the damage that Trump might inflict on our federal judiciary — given his penchant for heeding the advice of far-right-wing commentators and thinkers. Electing Biden does set the predicate for a longer-term repair of the damage that Trump will inflict.

Thus, the upcoming election — shall we say — has intense consequence on the future of our nation.

If you disbelieve the value of elections and the consequences they can produce, I present to you Exhibit A: Donald John Trump’s fluke victory in 2016.

One thought on “Electoral consequences? Yep, we have ’em!”