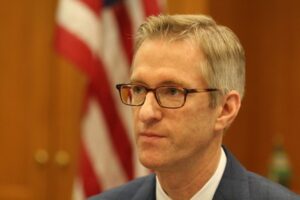 I have heard enough of this continual mislabeling of politicians in my hometown of Portland, Ore. by Donald J. Trump.

I want to et the record straight on a small, but still significant point.

Trump keeps yapping about “Democrat mayor” Ted Wheeler needing to take control of the city he governs, which has seen a spike in violent protests in the wake of the George Floyd murder in Minneapolis by police in that city.

Thus, for Trump to ascribe the violence in Portland and other major cities as byproducts of “Democrat” politicians’ policies is wrong. Dare I say that it is yet another lie.

Granted, Portland’s voting population is decidedly more progressive than Trump would prefer. Portland voters and those in Multnomah County voted overwhelmingly for Hillary Clinton in 2016 and will do again this time for Joe Biden. They endorsed Barack Obama in 2008 and 2012, John Kerry in 2004 and Al Gore in 2000.

However, the folks who govern the city of 675,000 residents aren’t elected as partisans. Indeed, few municipal governing bodies are run by partisan politicians in the United States. Most of them, just like those in Portland, are elected as non-partisan. I mean, there’s no Democratic or Republican way to pay for garbage pickup, or water service, or police and fire protection.

So, my strongest possible advice for Donald Trump is this: Do your homework — for once — when talking about who runs local governments.

One thought on “No such thing as ‘Democrat mayor’”