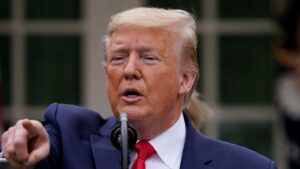 I am faced at this moment with the most vexing political dilemma I have encountered since I first became eligible to vote.

That was in 1972. I had just returned from active duty in the Army. The 26th amendment to the Constitution was enacted in 1971. I got to vote! Cool!

Now it’s 48 years later and I am trying to stare down this dilemma. It goes like this:

I am torn between wanting the economy and the nation’s health to recover from the global pandemic that is going to kill thousands more Americans while also wanting to remove Donald John Trump from the office of president of the United States.

The dilemma forms because Donald Trump would find a way to take credit for the nation recovering from the pandemic when, in my view, he has done damn near nothing to bring about a welcome conclusion to the crisis.

The economy might start to rebound later this year. Or it might continue to crater. Americans might no longer be stricken with the viral infection called COVID-19, or we might continue to get sick and die at a shocking and tragic rate.

Do I want the worst to occur? Of course not! I want there to be a full return to economic vitality and I certainly want an end to the misery, the grief and the tragic loss of life we are enduring at this moment.

However, a return to economic and physical vitality is likely going to produce a blizzard of self-aggrandizing and misleading (at the very least) pronouncements from the Nimrod in Chief about how “none of this could have occurred without me as your president.”

Perhaps the strangest aspect of it all is that millions of Americans are going to guzzle the swill that this con man would deliver.

Would a happy ending produce a Donald Trump re-election? I shudder at the thought. In my humble view, this individual — through his initial dawdling and dismissiveness about the pandemic — is responsible for more of the misery than he ever will acknowledge.

He deserves to be booted out of office.

4 thoughts on “Oh, the dilemma is maddening”