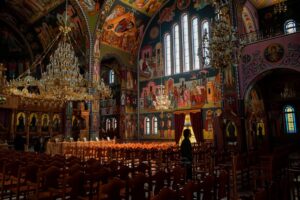 Many of my friends are aware of my ethnic ancestry; I guess my last name is a dead giveaway … you know?

One of them sent me a link from The New York Times that contains a story about how well Greece has responded to the coronavirus pandemic.

You can see the story here.

What fascinates me is how well the Greeks have responded to the pandemic in light of the intense criticism that has come their way over the years with their myriad financial issues, their reneging on national debt, the bailouts given to them by the European Union, not to mention the political chaos that kept waters roiling in Athens.

It appears that Greece got way ahead of the curve when the pandemic began leveling Europeans. They enacted “social distancing” measures right away; they began imposing restrictions on gatherings; they shut down business and effectively shut down their borders. They didn’t celebrate Orthodox Easter in the traditional way, as the picture attached to this post attests.

They have recorded fewer than 150 deaths from the viral infection. The Times article notes that Belgium, an EU member of comparable population, has suffered thousands of deaths and far more reported infections than Greece.

OK, have said all that, the report card isn’t a straight-A grade. Greece has tested a small percentage of its population of 10.7 million citizens, which means the reports of infections might be understated.

Still, according to the Times: Now, a country that has grown used to being seen as a problem child in the European Union is celebrating its government’s response and looking forward to reopening its economy.

“Greece has defied the odds,” said Kevin Featherstone, director of the Hellenic Observatory at the London School of Economics.

Yes, that means you, too, Donald Trump!