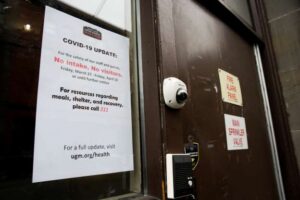 Among the many zigs and zags that Donald John Trump has performed in reaction to the coronavirus pandemic, I want to look briefly at one of his acrobatic tricks.

When he was downplaying the significance of the outbreak in its early stages — referring to how it would disappear miraculously from the face of the planet — he compared it to influenza. Trump said the flu kills many more Americans annually than he projected the coronavirus would claim. Do you recall that?

The flu kills 37,000 people each year, Trump said, disparaging the potential impact of the COVID-19 strain of the virus.

Donald Trump his own self said the coronavirus could kill as many as 200,000 Americans before the crisis ends. The implication is that the deaths would occur perhaps before the end of the calendar year.

Why has no one called him out on that?

It’s an example of the idiocy that Trump was spouting early in the crisis, seeking to downplay its significance while also seeking to cover his own (ample) backside while the rest of us began to worry ourselves into near apoplexy.

The worst is yet to arrive in the United States of America.

Leadership from the top of our governmental chain of command requires truth telling at all times. We damn sure weren’t getting it in the beginning of this pandemic. Truth telling remains missing in action now.