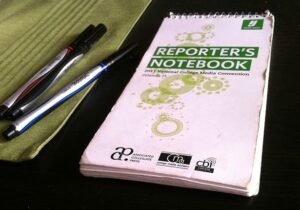 The Tampa Bay (Fla.) Times has made an announcement likely prompted many of us who toiled in the craft of daily journalism to laugh out loud.

Look, I have been through a couple of these pay cuts. They weren’t announced as temporary by Morris Communications, the corporate owner of the paper where I worked at the time. I went through this agony twice, in addition to watching the company cease its corporate match of our retirement fund. Morris’ high command made some bad business decisions and dished out punishment to those of us who had to live with the consequences.

The Tampa Bay Times brass says revenues are down. The newspaper intends to right the ship over the next few months.

Good luck with that. The media climate is changing under their feet. I wish them well. I want my former colleagues to be made whole.

I just fear that the “temporary” pay cut will be nothing of the sort … unless “temporary” morphs into layoffs.