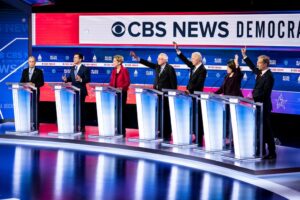 Timothy Egan is a fabulous reporter and writer. I am in the middle of a book he wrote about the Dust Bowl, “The Worst Hard Time.” It’s a great read that captures the essence of the Texas Panhandle, where I lived for 23 years.

He also is an astute political observer. He has written in The New York Times that the Democratic Party primary field needs to cull itself now, get down to the two leading candidates: Joe Biden and Bernie Sanders.

Egan thinks there’s a good chance Warren will lose to Sanders in her home state of Massachusetts, which votes on Super Tuesday. Hmm. If she can’t win there, well, where else is there?

If I were king of the world, I would strongly prefer Biden over Bernie.

My sense is that the country needs to return to an old fashioned politician — and I mean that in the good way — who knows how to govern. Someone who knows the importance of compromise. We don’t need another “revolutionary,” which is how Sanders portrays himself and his legions of supporters.

Yes, I know that both of these guys are old. They’re both pushing 80. I am not all that far behind them on the road to eternity, so I can kinda/sorta relate to them.

The country, though, needs Joe Biden to restore some values of decency, decorum, dignity to the White House. I have had enough of Donald Trump. As for the rest of the Democratic Party field, heed Timothy Egan’s advice … and stand down.