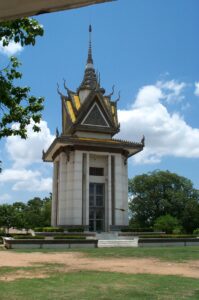 Take a good look at the structure you see here. It’s called a stupa. This one is at a place called Choeung Ek, which is just outside Phnom Penh, Cambodia.

I’ve visited this place twice, in 1989 and again in 2004. I have written a blog post already about a remarkable Thanksgiving dinner some colleagues and I enjoyed in Vietnam in 1989. We had just visited Cambodia and returned to Vietnam to continue our journey through Southeast Asia.

I want to explain what this stupa is and what it contains.

It is temple that is full of human skulls. They were dug out of the ground, excavated from mass graves around the structure. The men, women and children who were buried there were victims of one of the 20th century’s most hideous regimes, the Khmer Rouge terrorists who ran Cambodia from 1975 to 1978. Their leader, Pol Pot, wanted to purge his country of citizens who were educated, who presented any sort of threat to the regime’s power.

All told, it is estimated that Pol Pot killed about 2 million Cambodians in one of the century’s worst cases of genocide. The country is littered with mass graves similar to the one next to the stupa.

We spoke during that 1989 tour of Cambodia with survivors of that terror. One young woman told me then that if Pol Pot were to come back and threaten her country, “We all will become soldiers” who would fight the Khmer Rouge to the death.

The Khmer Rouge didn’t come back. Vietnamese armed forces invaded the country in 1978 and exposed the horror to the world. The authorities were able eventually to hunt down Pol Pot. They captured him and imprisoned him; he died while awaiting trial for crimes against humanity.

The killing fields have been set aside as permanent memorials to the sacrifice endured by brave people of Cambodia. I want to show you this stupa to illustrate just one more time why our Thanksgiving in Vietnam was so special to us.

It filled me 30 years ago with a sense of gratitude I likely would not have felt had I not laid eyes on this stupa and peered at the skulls stacked from floor to ceiling inside it.

Yes, the holiday is a time to reflect. I choose to reflect as well on the tragedy that so recently befell a far-off land and pray — no matter how unlikely — for an end to this level of inhumanity.

When you lay eye on the evidence of such horror and hear the testimony of those who lived through it … and enjoy a meal served to commemorate your nation’s Thanksgiving holiday, you certainly understand why you have so much for which you give thanks.