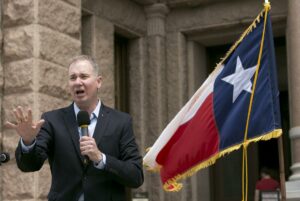 As I survey the lingering damage done by the downfall of Texas House Speaker Dennis Bonnen, I am left to hope that a good bit of collateral damage has been inflicted on a key principal in that fiasco.

That would be Empower Texans and the political action committee’s founder/guru/main man Michael Quinn Sullivan.

Sullivan met in June with Bonnen, who delivered him the names of 10 Republican legislators who Empower Texans could target in the 2020 election. Bonnen didn’t know it in the moment, but Sullivan plunged a knife into his back by recording the conversation.

Bonnen offered Sullivan’s right-wing lobbying group access on the House floor by issuing it “media” passes. Empower Texans is by no stretch of the imagination a media outlet. It is an advocacy group that seeks to bend the Legislature to its rigid ideology.

Bonnen denied initially the leaked reports about giving up the legislators to Sullivan, who then produced the recording of Bonnen doing precisely what Sullivan said he did.

Bonnen was toast. Many of his fellow GOP lawmakers called for his resignation. Bonnen didn’t quit, but did the next best thing: He announced he wouldn’t seek re-election in 2020 to his Angleton House seat.

My strong hope is that Empower Texas becomes a PAC non grata among Texas legislators. Democrats already detest Empower Texans and Sullivan. So do a number of moderate Texas Republicans; and, yes, there are some moderates among GOP legislators’ ranks, as I happen to know some of them.

Sullivan betrayed Bonnen, who in turn betrayed his Republican colleagues, many of whom supported his election as speaker at the start of the 2019 Texas Legislature.

Bonnen will be gone from the 2021 Legislature. Empower Texans, which has sought to meddle in local politics for too long already, needs to be gone as well.

If I were a Republican Texas legislator, I damn sure wouldn’t trust Michael Quinn Sullivan as far as I could throw him.