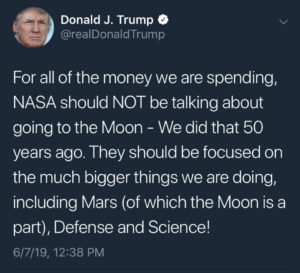 Here you go. Check out this Twitter message that flew into cyberspace today from the president of the United States of America.

He now says the United States needs to send human beings to Mars. That’s the big goal. The moon? Forget about it, says Donald Trump. We’ve been there already. Done that. Let’s not go back.

But wait a minute!

The president himself issued a directive in 2018 committing a return to the moon within the next five years. Vice President Mike Pence has spoken about the president’s stated desire to return to the moon, the celestial body we departed when Apollo 17 lifted off from the lunar surface in 1972.

So, which is it? Are we going to the moon or not? Or are we going to skip all that Mickey Mouse stuff and head straight for the Red Planet?

Don’t get me wrong. I am totally in favor of manned space travel. I want humans to return to the moon. I want them to fly to Mars, too. I am just flummoxed as to what the president wants to do. He cannot seem to deliver consistent and cogent messages.

Here again is what happens when we turn Donald Trump loose to make declarations via Twitter without a scintilla of thought or consideration.