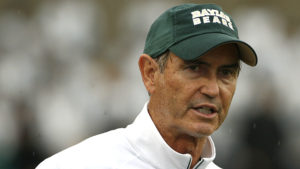 I got raked over the coals for an earlier blog post critical of a hiring decision at Mount Vernon High School in East Texas.

A fellow who criticized my blog post stood behind the hiring of former Baylor University head football coach Art Briles as the head coach at Mount Vernon HS.

He said this: You are talking about one of the best coaches our state has ever seen. He deserves a second chance. Yes he made mistakes but a college coach cannot babysit all of their players.

I feel the need to respond briefly with — yep! — another blog post.

Briles was fired in 2016 as Baylor’s head coach after he covered up allegations of sexual assault by his players on women at Baylor. The scandal swallowed the campus damn near whole. It also swept away the university’s chancellor, Kenneth Starr, who resigned.

Here is what I cannot accept about the idea that Mount Vernon Independent School District was looking for a first-rate football coach before hiring Art Briles: Texas is a gigantic state chock full of fine football coaches who aren’t tainted by the indelible stain of a sex scandal!

Football is a big deal in this state. Isn’t that what we all recognize? Sure it is!

Therefore, I am baffled, puzzled and utterly astonished that Mount Vernon ISD would turn to a guy with the baggage that Art Briles brings to this job. The Dallas Morning News noted today in an editorial that while Briles is likely to coach his team to a lot of wins on the field, the football program well could be sullied by the history Briles brings to his new job.

I just believe that Mount Vernon ISD could have done so much better than to hire a guy who got fired from his college coaching job because the young men he was assigned to lead toward adulthood became involved in a case of serial sexual assault!

This is the best that a public school system could do?