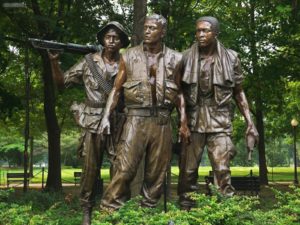 To my fellow veterans, I am sending you a note in a form I usually reserve for politicians. This is an open letter to you, our heroes.

You know who you are, even if you won’t acknowledge it. You are the individuals who paid the ultimate price for defending our nation against its enemies.

I want to share some thoughts with you on this Memorial Day. Your heroism hasn’t been forgotten.

Our nation has been honoring you since the Civil War. They used to call it Decoration Day. It morphed into Memorial Day. These days, of course, we spend a lot of time grilling outdoors, taking advantage of the unofficial start of summer. We play with our families, laugh and carry on.

But this holiday carries a deep and somber meaning. Your loved ones, those who still mourn their loss, always commemorate your heroism on battlefields far away. For them, every day is Memorial Day.

I once had the honor of taking part in the development of an exhibit intended to honor you. It’s in Amarillo. They call it the Texas Panhandle Veterans War Memorial. The then-head of the Vets Center in Amarillo — Pete Garcia, a U.S. Air Force veteran — asked me to write some narratives that would be engraved on one side of stone tablets; the narratives gave a brief history of the conflict to be memorialized. I did so, along with two other fellows who lived in the Amarillo area.

On the other side of the tablets contain the names of those Texas Panhandle residents who fell during those wars. Some of your names are engraved on the stones.

I was proud to play a small part in that project. It’s up now and is growing. Randall County Judge Ernie Houdashell — a Vietnam War veteran — has added wonderful new exhibits to the memorial site: an F-100 fighter jet; a UH-1 Huey helicopter; and most recently, a piece of the battleship USS Arizona, which was sunk by Japanese war planes at Pearl Harbor. The memorial board has acquired the now-abandoned county annex building next to the memorial and hopes to turn the annex into an interactive museum.

The centerpiece of that memorial, though, is the names etched in stone. Two of them belong to Medal of Honor recipients: Marines Thomas Creek (who died in Vietnam) and Charles Roan (who died in World War II). They all are your brothers.

You’re all heroes. We owe you eternal thanks because you paid your last full measure of devotion to the nation we all love.