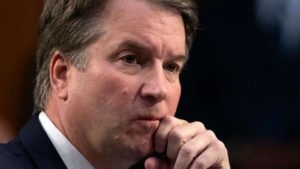 Jeff Flake’s demonstration of political courage almost made me rethink my long-standing opposition to term limits for members of Congress.

Flake is a Republican member of the U.S. Senate Judiciary Committee that on Friday recommended the confirmation of Brett Kavanaugh to a seat on the Supreme Court. Flake is not running for re-election this year. Thus, his lame-duck status has enabled him to grow a pair of, um, stones that he otherwise likely wouldn’t have grown.

You see, Flake — after announcing his decision to support Kavanaugh’s nomination — came back to the committee hearing room and asked that the Senate delay a full confirmation vote for a week to allow the FBI to do an additional investigation into some serious allegations leveled against Kavanaugh.

Christine Blasey Ford has accused Kavanaugh of sexually assaulting her. They were teenagers when the even allegedly occurred. She presented a compelling case against Kavanaugh. Ford persuaded me that her allegation is credible enough to disqualify Kavanaugh from obtaining this lifetime judicial appointment.

Flake was cornered in a Capitol Building elevator by two women — sexual assault survivors, apparently — who demanded that he “listen” to the concerns of other victims.

Flake responded by making his request of the Senate. The Senate agreed. The president then called on the FBI to conduct a limited probe into the allegations. It should take about a week or so to complete.

I applaud Sen. Flake for his political courage, although the courage is watered down a bit by the fact that he isn’t facing Arizona voters this fall. He is free, therefore, to speak from his heart. He did so.

If only other members of the Senate and the House of Representatives could demonstrate such guts when they have to face the voters as they seek re-election.

Having said all that, I remain committed to the notion that voters in each state and House district have it within their power to boot out scoundrels at election time.

Flake, though, must have emerged as a GOP hero in this ongoing — and terribly frustrating — political battle of wills.