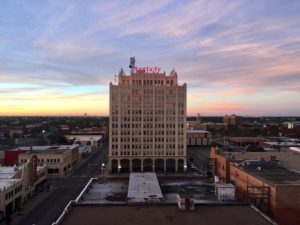 The structure in this picture is of the Santa Fe Building in downtown Amarillo, Texas. It is one of the two most architecturally interesting buildings in the downtown district; the other is the Courtyard Hotel that is housed in the historic Fisk Building just down the street.

What’s the purpose of this post? Well, my wife and I have moved away from Amarillo, but we haven’t severed our ties with the city. We intend to return regularly. One of our sons lives there and works in the Santa Fe Building.

This blog intends to point out how much I look forward to watching downtown Amarillo evolve. Given that we won’t see it do so daily, we’ll be able to watch the evolution occur over periods of time. I look at it as watching the city change in a sort of time-lapse fashion.

The Santa Fe and Fisk buildings over time might lose their standing as the downtown district’s most prominent structures. Yes, the city also has that 31-story tower that eventually will be called the First Bank Southwest Tower once the bank moves into its ground-floor digs.

With all the activity that’s occurring downtown, my hope is to watch all this unfold in larger chunks. They’re building the ballpark on Buchanan Street. They’ve already opened the Embassy Suites Hotel across the street from the Civic Center.

Other buildings along Polk Street are being rehabbed, rebuilt, re-purposed.

We’ll be on the road to this or that destination, but we will return to Amarillo to pick up and then deliver our recreational vehicle.

Yes, I look forward to watching the city remake itself.

We lived for more than two decades in Amarillo. We enjoyed our life there. However, for most of that time, downtown didn’t appear to take many steps forward. There was a sense of stagnation and at time apathy toward the center of the city.

No longer. The city is moving forward at an accelerating pace.

I will be thrilled to watch the progress taking tangible shape each time we return.